Audiobook review: Love on the Tracks 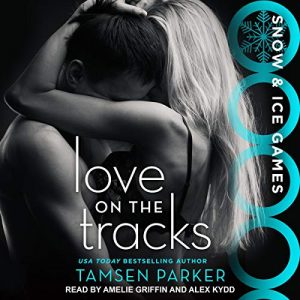 I’ve now had the opportunity to read and/or listen to several titles by Tamsen Parker, and I can say with some certainty that Love on the Tracks is one of my favorites so far. Rowan is a twenty-year-old luger who is competing in her second Snow and Ice Games (SIGs) and knows exactly what it’s going to take in order to achieve the goals she’s set for herself. Unlike other stories about child stars or athletes who are growing into adulthood, Rowan has her own hands firmly on the wheel. Despite all of her control, I really did enjoy seeing her lose 90% of it when faced with her biggest crush at a press event.

Which brings up Zane Rivera, aged twenty six, lead singer of one of the most popular boy bands in the world, and disenchanted adult about to choke on the need to strike out on his own. I liked Zane, too, especially as he was the voice of reason (and maturity) in his group. He quickly became very human as the narrative progressed, always looking at his situation objectively, yet allowing himself to indulge in moments of wistfulness and hope where Rowan is concerned. Zane definitely struck me as the more romantic of the two while simultaneously respecting Rowan’s decision to put luge first throughout the novel.

In addition to the unique qualities of the main characters mentioned above, I appreciated the author’s attention to detail with regards to Rowan’s sport (luge), as well as allowing her to know herself well enough to make—and stand by—her decisions. Rowan is a strong, independent, sexually competent young woman who isn’t about to sacrifice her career to the romantic expectations of traditional gender roles. Fleeting intimacy works just fine, thank you very much, and she’s fortunate and responsible enough to look after all the finer points of such opportunities on her own. That Zane is equally happy for her to call the shots was a nice bonus. Good for them both.

Narration: Unfortunately, the main weakness I observed in Love on the Tracks was in the audio presentation. Both of these narrators are new to me, so I wasn’t sure what to expect from either one. Amelie Griffin did well with Rowan, balancing her matter-of-fact approach to most aspects of her life with her anxiety over the sudden onslaught of public attention that is a byproduct of “dating” Zane. Alex Kydd’s interpretation of Zane, on the other hand, took me a good bit longer to settle into, his tone persistently more lazy (or even stoned) than laidback. Zane is the “good guy”—good bandmate, good friend, good brother, good uncle, good boyfriend, etc.—with such certainty, that the questioning intonation that seemed to routinely sneak back into his voice felt a little discordant at times.

Overall, I think Love on the Tracks is a sweet, fun tale about a refreshingly  unconventional main couple that I ended up liking a good deal. In addition to the two strong lead characters, there were several others whom I also liked, except for Rowan’s father, who I really did not care for by the end of the story. While I had mixed feelings regarding the narration as a whole, I’d still like to go back and read it sometime in the future. Though not what I’d usually choose for myself, I enjoyed Love on the Tracks enough that I’m looking forward to explore other titles in the series.

Welcome to the Snow and Ice Games where the competition is fierce and the romance is HOT.

Rowan Andrews is the unexpected darling of the Denver Snow and Ice Games. Luge has never captured the American public’s imagination as much as figure skating or even hockey, but her outsized personality and dare-devil ways have got everyone’s eyes glued to the track. Including a certain chart-topping heartthrob.

Zane Rivera is the lead singer of License to Game, the hottest band in the country. When Zane finds out Rowan Andrews has had some complimentary things to say about him, he arranges to meet her while he’s in Denver enjoying the games. And when a photo of him kissing Rowan on the cheek goes viral, they both see the advantages of faking a relationship for the publicity.

After Rowan’s injured in her final race, their relationship starts to feel all too real to Zane. But is this rock star ready to fall in love?