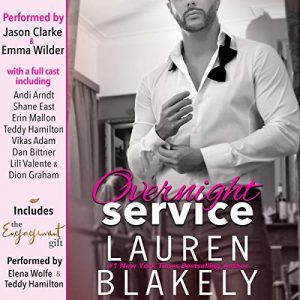 Overnight Service is a more of a second chance romance than an enemies to lovers, considering they never really hated each other. Josh and Haven met by working together, but after they have a fling and Haven is up for a promotion, Josh recuses himself from voting for her their time together is put to an end. Haven believes the worst about why Josh doesn’t vote for her and because of no communication they part ways.

Josh can’t get Haven out of his mind and it doesn’t help that they see each other from time to time as they are business rivals, since Haven left the agency they worked at together after not getting promoted.

Neither of them have been able to move on, still thinking of the other. There’s a white hot chemistry between them and they are only fooling themselves when they try to fight it. Their friends all know they are still hung up on each other.

Overnight Service is about Josh and Haven coming to terms with their true feelings for each other and working through their issues to find a HEA. They are both likable characters and it was fun to watch them realize they love each other and are made for each other.

Narration: Emma Wilder (Haven) and Jason Clarke (Josh) narrate the bulk of Overnight Service. The POV switching was very seamless from chapter to chapter and within the same chapter, both narrators voice the back and forth dialogue.

I look forward to listening to the next story, Special Delivery which features one of Josh’s sisters and his co-worker.

Top three reasons why sleeping with the enemy is a bad idea….

And yet, I’d like to be up against the wall in a stiff competition to get her to call out my name.

Time to double down on my resistance to her tough-as-nails, take-no-prisoners, sexy-as-sin attitude. The same attitude I find irresistible.

That’s a big problem, because in this race to nab the client, I run into Haven in the hotel, on the beach, in the guest quarters late at night.

Hate sex would be a terrible idea.

Except it’s the complete opposite, and now we can’t keep our hands off each other.

Trouble is, I’m not so sure it’s hate I’m feeling anymore.

And that’s the biggest reason sleeping with the enemy you’re falling for is a bad idea – my job literally depends on never letting her into my heart.