Audiobook review: The Hero and the Hacktivist 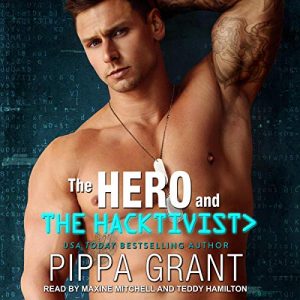 After not loving the last Pippa Grant book I listened to, I am glad to report that my love is back. The Hero and the Hacktivist is the fourth book in the Girl Band series, and I loved seeing the final band member, Eloise, get her HEA. Over the course of the previous three books in the series, we’ve learned very little about Eloise: she’s a constant horn-dog and goofball, and she has some scary hacking skills that she uses to wrong social injustices. She’s met her match in Rhett, her bandmate and buddy Parker’s brother (Stud in the Stacks). He’s a Navy SEAL who is put on recruitment duty after a mission that went sideways. The pair hookup at Parker and Knox’s wedding, and what follows is a wonderful, often hilarious tale.

What draws me to these stories is the wild humor and amazing characters. Rhett and Eloise have the same sharp wit and amusing banter as the previous couples, but they are super off-the-wall different than others. They can be outrageous with one and other without driving the other away. Once each gets past their own fears and learns to trust a bit, the characters begins to reveal strong emotions through quality storytelling. For Eloise it’s about learning to trust others and get past old hurts. To accept herself and that others love her just how she is. For Rhett, it’s reevaluating where the SEALs fit into his life and where he’s going. How family and friends play a roll. How he gets the same thrill of a mission just being with Eloise.

Narration: Teddy Hamilton and Maxine Mitchell provide the voices behind the characters. The story is shared in the alternating, first person POVs of Eloise and Rhett, and both narrators are equally suited to their roles. Mr. Hamilton has a gravely, deep voice with an air of cockiness that suits Rhett perfectly. His female voices (most notably Eloise and Rhett’s sister, Parker) are softer and distinguishable. Ms. Mitchell can be soft and insecure or brash and confident, perfect for Eloise, and her male voices are nearly as strong. The pair makes a great team, enhancing the story.

The Hero and the Hacktivist is another win for me, and I highly recommend listening to all four of the Girl Band stories.

He has the muscles of Adonis, an ego bigger than the sun, and a very clear desire to get back in my pants. Which would be fantastic if he weren’t a SEAL and I wasn’t a criminal.

Although, I prefer the term avenger.

I’m a hacktivist, cleaning up the cesspool of cyberspace one scam artist and troll at a time, and I sometimes bend a few rules to get justice done.

He’s a military man with abs of glory, sworn to uphold the letter of the law no matter its shortcomings. And if he’d known who—or what—I was, I doubt he would’ve banged me at my best friend’s wedding reception.

Or come back for more.

Which is why he’s now the only thing standing between me and one very pissed off internet troll who’s figured out where I live.

I’m pretty sure he’ll get me out of this alive—and quite satisfied, thank you very much—but I’m also pretty sure this mission will end with me in handcuffs.

And not the good kind of handcuffs.