Audiobook review: The Will and the Wilds 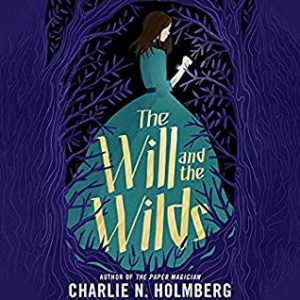 Note: because I listened to the book in audiobook format, I had to guess on the spelling of some of the creatures and names. I apologize for incorrect spellings.

The Will and the Wilds shares the story of 20-year-old Enna who lives with her father at the edge of the wildwood. Enna’s father‘s mind is slightly demented because of his foray into the monster realm. Her mother was killed by mystings when she was 8 mos. pregnant (Enna’s father was able to save the baby). Now terrible Gobbler mystings are after a magical stone Enna wears for protection, so she summons a Narval mysting to help protect her father and her. However, one should never trust the mystings, and soon Enna finds herself bound to Maekallus, and he to the human realm. As he dies, she dies, so she must find a way to break the binding and send Maekallus back home.

The Will and the Wilds has a Beauty and the Beast vibe as Maekallus, the monster, and Enna, the human, develop a friendship of sorts while they are tied together, neither able to escape. And like the Disney classic, Maekallus has the power to release Enna, but chooses to keep her rather than grant her freedom. At first, I enjoyed Enna’s wonder as she learned more about the mystings. The story moved slowly, but there was also a sense of urgency that kept it going forward. However, as the story progressed, it began to drag. Enna fruitlessly tried solutions to solve their problem and none worked. She was drowning, however just at the surface, and stuck. And it just kept going on and on and on. Finally at the 50% mark, I sped up the playback speed (from 1.25x to 1.5x) just to get the book moving.

Like Beauty and the Beast, there is a romantic storyline; however I felt it was a bit warped; very Stockholm Syndromesque. At the beginning of the story, we learn of a handsome local boy, Tennith, that Enna fancies. She even kisses him. Yet as she gives more and more of her soul to Maekallus, she becomes cold inside and indifferent to Tennith. And somehow this turns into a love for Maekallus. I didn’t feel it, but maybe it will work for you.

Narration: The story is shared via two different present tense POVs, Enna and Maekallus. First, and for most of the book, there is the first person POV of Enna. Ms. Dawe uses a very age-appropriate sounding voice – feminine and light, not deepened with age. The POV changes at times to that of the third-person of Maekallus. Ms. Dawe changes her voice with the change in POV, even though it is third person. Overall, Ms. Dawe is amazing. She transforms her voice so completely from character to character that it sounds like a full cast. She alters dialogue to fit the gender and age of the speaker, hitting deep for males and nailing young for child. The narration of The Will and the Wilds is sublime.

Overall, The Will and the Wilds was an okay story. The concept was entertaining, but the execution fell flat. The 20-year-old protagonist was naive and felt more like 16 or so. At times, the present tense narrative felt clipped and disrupted the flow of the story. The book was slow and meandering, but not in a way I like.

My Ratings
Story: C-
Narration: A

A spellbinding story of truce and trickery from the Wall Street Journal bestselling author of The Paper Magician series.

Enna knows to fear the mystings that roam the wildwood near her home. When one tries to kill her to obtain an enchanted stone, Enna takes a huge risk: fighting back with a mysting of her own.

Maekallus’s help isn’t free. His price? A kiss. One with the power to steal her soul. But their deal leaves Maekallus bound to the mortal realm, which begins eating him alive. Only Enna’s kiss, given willingly, can save him from immediate destruction. It’s a temporary salvation for Maekallus and a lingering doom for Enna. Part of her soul now burns bright inside Maekallus, making him feel for the first time.

Enna shares Maekallus’s suffering, but her small sacrifice won’t last long. If she and Maekallus can’t break the spell binding him to the mortal realm, Maekallus will be consumed completely—and Enna’s soul with him.