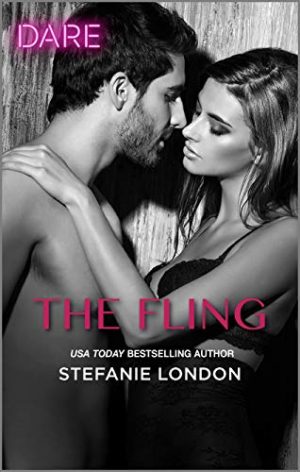 Thankfully, I had to finish The Fling to review it. It did not start strong for me, playing into multiple stereotypes about dippy bridesmaids, a perfectionist sister, and the black sheep of the family.  Thankfully, London did not leave me there for long—she couldn’t.  It’s a short novel and doesn’t have the length to develop characters slowly.  In fact, it moves so quickly that we have a “fling,” hence the title, in the first 12% of the book. Flynn Lewis and Drew Richardson are temporary neighbors when they meet in the hall of their exclusive apartment building. They flirt. They fling.

The one-night stand sets up a predicament because Drew’s twin sister is marrying Flynn’s cousin.  Unknown to the other, Flynn is the best man and Drew is the maid of honor.  They’ve been exchanging tense emails regarding their wedding duties. When the truth is revealed… awkward.  Unfortunately, the book depends too heavily on their physical chemistry to carry them through all the awkward moments of their opposing personalities.  One of those moments went too far for me where Flynn intentionally embarrassed and hurt Drew. He actually declares his actions as payback to Drew’s actions, but it felt disproportionate.  When confronted, he does not really apologize.  After that moment in particular, Drew says, “Why do I keep wanting to have sex with you? I don’t even like you.” I was scratching my head on that one too.

Ultimately, I liked these characters more than I liked their story or even them together.  London creates moment of vulnerability which her characters embrace.  She makes it make sense, but for the speed of the action, it’s a lot of disbelief to suspend.

I swore off romance after my ex broke my heart, so I’m not thrilled to be back home performing maid-of-honor duties for my twin sister. Her bridesmaids want everything to be capital P Perfect, and the best man, Flynn Lewis, is a giant pain in the ass—if his emails are anything to go by. Thank God for the delicious distraction next door: the anonymous “Mr. Suit.”

My nameless neighbor is utterly gorgeous and oh-so-serious. After a racy night of passion at his place, the truth comes out. “Mr. Suit” and Flynn Lewis are one and the same. Flynn wants a woman who’s as serious as he is—someone who wants to stay in Melbourne. But I’m happiest heading off on another adventure. We might be complete opposites, but the chemistry between us is red-hot…as long as no one gets burned.