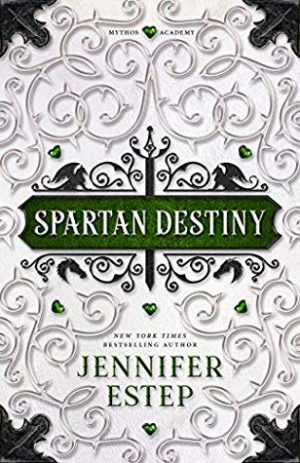 Ian must have sensed my worry, because he stared at me, a questioning look on his face. I held up a clenched fist, telling him and Zoe to hold their positions. I still didn’t see anything on the first floor, but I couldn’t shake the uneasy dread that had curled up in my stomach, so I decided to check in with the final member of our team.

“Mateo?” I whispered. “Are we still clear? Mateo?”

Static crackled in my ear, but he didn’t answer me. Mateo wouldn’t abandon his position, and he certainly wouldn’t take out his comms device unless…

Ian and Zoe both frowned. They had heard the crackling static through their own earbuds. Ian hefted his ax a little higher, and Zoe did the same with her electrodagger.

“Guys,” I whispered. “Head back toward the stairs, but walk, don’t run. Someone else is in here with us, and we don’t want to tip them off that we know they’re here.”

“But what about protecting the artifact?” Zoe whispered back. “That’s the mission.”

“I know, but we can’t protect anything if we’re dead. Us getting out of here alive is the most important thing right now,” I replied.

Ian and Zoe both nodded, then headed back the way they’d come.

Once again, I crept along the second-floor balcony, following their progress and keeping an eye on everything below. Ian and Zoe made it back to the center aisle. They both looked left and right, but they didn’t see anything, and neither did I. My friends glanced around a final time, then stepped into the aisle to head back toward the stairs.

And that was when the Reapers finally showed themselves.

A shadow detached itself from the fireplace and slithered onto the floor. I blinked, wondering where it had come from, but then I realized that a second shadow was right behind that first one—and they had both just crawled out of the cold fireplace.

That was why I hadn’t spotted them. I had been looking in the wrong place. I had expected the Reapers to hide in the shadowy stacks or behind the long counter. Not to be holed up in the freaking fireplace. But the Reapers were sneaky, and I should have been expecting the unexpected. That was my mistake, and I was going to have to pay for it.

And so were my friends.

The two shadows straightened up. They were both wearing long black Reaper cloaks with the hoods pulled up, along with creepy black harlequin masks covered with red diamond-shaped patterns. And worst of all, they were both carrying swords, which they drew the second they were on their feet.

Ian heard the soft rasps of the weapons sliding free of their scabbards, and he whirled around. “Zoe!” he yelled. “Watch out!”

Zoe whirled around as well, brandishing her electrodagger at the two Reapers. For a moment, the four of them studied one another, waiting for someone to make the first move. Then one of the Reapers let out a loud battle cry and charged forward, and the fight was on.

Ian stepped up to engage one of the Reapers, while Zoe battled the second one.

“Rory!” Babs yelled, her lips moving under my palm. “You have to help them!”

I abandoned all pretense of stealth and surged to my feet. My gaze darted around, searching for more enemies, but I didn’t see anyone else, so I rushed over to the bookcase that my friends had been crouching beside earlier. I didn’t want to waste time shoving through doors and running down steps, so I decided to take a quicker and more direct route down to the first floor.

Zoe had left her backpack sitting on the floor, and I ripped open the top, searching through the items inside. Heavy-duty tape, scissors, a plastic case full of extra earbuds. The Valkyrie had stuffed all sorts of odds and ends inside her bag, but I quickly found what I wanted.

Another small grappling hook attached to a long length of rope.

I pulled out the items and hurried over to the balcony. I set Babs on the floor and then wrapped the hook and the rope around the railing and tugged on them to make sure they were secure. I grabbed Babs again, took hold of the rope in my other hand, and climbed up onto the railing.

As a Spartan, I had the innate ability to pick up any object and automatically know how to kill someone with it. My Spartan instincts also let me see every single move a person was going to make a split second before he made it, especially when it came to a fight like the one raging below. I focused on the Reaper who was battling Zoe, studying everything about him, from the way he was holding his sword, to how high he lifted the weapon, to how his boots shuffled along on the floor right before he lashed out with another strike.

My Spartan instincts kicked in, and the next few seconds of the fight unspooled in my mind like a movie that I was fast-forwarding through to get to the next scene. Zoe would brandish her electrodagger at the Reaper again, and he would whirl out of the way. Then he would come right back at her, and this time, he would force his way past her defenses and slice his sword across her stomach.

Unless I stopped him.

And I was going to stop him. All I had to do was wait for the right moment.

The fight went exactly the way I’d expected it to. Zoe lashed out with her dagger, and the Reaper spun out of the way. The second he turned his back to her, I tightened my grip on the rope and stepped off the balcony.

The rope burned my left palm as I slid down it, but that pain didn’t matter. Saving Zoe was the only thing I cared about right now.

I slid down the rope, and I timed my descent just right, so that I landed between Zoe and the Reaper. Even before my boots touched the floor, I snapped up Babs, blocking the Reaper’s attack.

“Help Ian!” I screamed at Zoe.

She scrambled back out of my way and hurried over to where Ian was still fighting the second Reaper.

The Reaper in front of me jerked back in surprise, but I wasn’t letting him get away that easily. I darted forward, slipped past the Reaper’s defenses, and looped the rope that I was still holding around his neck. Then I whirled back around, tightening the rope.

The Reaper yelped in surprise. He lashed out with his sword, but it was an awkward blow, and I smashed Babs into his blade, knocking his sword out of his hand. His weapon skittered across the floor and spun to a stop beside one of the tables.

I turned back to the Reaper. He was trying to untangle the rope from around his neck, so I stepped up and kicked his leg out from under him. The Reaper let out a strangled cry and grabbed hold of the rope to try to keep himself from choking, but he wasn’t successful, and he went slack and still and dropped to the floor.

He was out of the fight, so I turned toward the second Reaper, who was still battling Ian and Zoe.

That Reaper swung his sword at Ian, driving the Viking back. The Reaper also spotted Zoe sneaking up on him, and he kicked out with his foot, sending a chair skittering in her direction.

Zoe stumbled over the chair, growled, and raised her dagger, but it was too late. The Reaper stepped up and sliced his sword across her stomach. Zoe dropped to the floor without a sound.

He hefted his ax and charged forward, but the Reaper coolly spun to the side and sliced his sword across Ian’s back. Ian also dropped to the floor without a sound.

The Reaper whirled around to me, since we were the last two fighters standing. He stared at me, his blue eyes bright behind his creepy harlequin mask. He performed a low, mocking bow, then straightened up and crooked his finger in a clear challenge. He had taken care of my friends, and now he wanted to do the same to me.

I let out a primal scream of rage, lifted Babs high, and charged at the Reaper.

This Spartan makes her own destiny . . .

Most kids at the Colorado branch of Mythos Academy know me as Rory Forseti, the daughter of Reaper assassins. Secretly, I’m a member of Team Midgard, a group of students and adults tasked with stopping Covington, the evil leader of the Reapers of Chaos. For me, the mission is a deeply personal one, since Covington is also the man who murdered my parents.

When my friends and I get a lead on a powerful artifact that Covington wants to steal, we think we finally have a chance to thwart the Reapers and stop them for good. Team Midgard comes up with a plan, but everything goes sideways, and I’m suddenly in the fight of my life.

My worst fears might have come true, but I know what my Spartan destiny is—to save my friends, or die trying . . .

Jennifer is also the author of the Crown of Shards, Elemental Assassin, Black Blade, and Bigtime fantasy series.