Audiobook review: A Blight of Blackwings 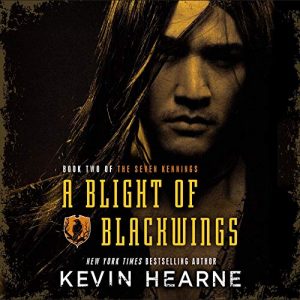 A Blight of Blackwings is the second book in a wonderful fantasy series from one of my favorite authors, Kevin Hearne. The massive story is set in a world where certain members of the population are blessed with Kennings, the ability to manipulate one of the four elements, plants, or animals. The six nations of Teldwena are dealing with the aftermath from an invasion of an unknown race simply known as the Bone Giants (although some know the race to be the Eculans), as well as the discovery of the sixth Kenning, mastery over animals. The book picks up immediately after the conclusion of the first book, A Plague of Giants, on Day 20 of the Bard’s tales. Reading the first book in the series is a MUST.

A Blight of Blackwings is the second part to the epic tale of the Seven Kennings. The book shares the journeys and battles of the land and its people, starting not at the beginning and ending not at the conclusion, yet not on a cliffhanger, but rather, at a point of rest in between the parts of the whole. This story is shared in two ways within each chapter, both in present day and in flashbacks that cover the past several months.

First, the story is narrated in present day by Dervan, a Brynt scholar and historian, friend of the ruling king, and survivor of the Bone Giant attack. He’s still trying to discover the truth behind the murder of his spy-mistress wife and doing what the king asks to help his country, which gets him wrapped up in espionage and political maneuverings. Dervan’s story provides a few exciting twists and turns in the plot. From Dervan’s point of view, readers are able to experience how the war is impacting the survivors, most significantly how they are dealing with a shortage of food and supplies.

Dervan continues to accompany Fintan, the Raelic Master Bard, each day and records the knowledge and tales Fintan shares with the masses on Survivor Field. A Raelic bard has perfect memory recall and the ability to transform shape into the character whose story he shares. Which leads me to the second method of storytelling, which is Fintan’s recounting of the events of the very recent past. By taking on the personas of key figures of the war and its aftermath and sharing their stories, Fintan allows the survivors (and readers) to slowly learn about how the lands arrived in their current state. Each character is carefully selected, and over the course of the book, we begin to see important connections. The stories are both informative and personal, not only providing important puzzle pieces, but also creating a heart for this epic tale.

Overall, A Blight of Blackwings shares the stories of a changing world: the uprising of the oppressed who demand a new government, the creation of a new settlement, the knowledge of a spy, the introduction of a new race of people, and learning that the world is much bigger than the lands of Teldwena. The story is epic, but told in a way that makes it personal and intimate. I have come to care about these characters, following them on their journey. Some are at peace, while others are troubled or their outcomes unknown or unfinished. The world is diverse and amazing, with so many peoples, animals, settings, and manifestations of the Kennings. Mr. Hearne created a full and lush world that fills my mind with awe.

Narration: The performances of Luke Daniels and Xe Sands are phenomenal! As I mentioned, the story is shared in two different ways. Dervan is shared via his first person POV, with Fintan’s seemings and stories shared via first person of that character. Most of the narrative is read by Mr. Daniels. He is the primary voices of Dervan and Fintan, as well as all male flashback/memories. Ms. Sands jumps in to share the bard’s female-centric stories. Both provide a massive array of accents and tones, ranging heavy and deep, to airy and light. Both provide such a variety of inflections and emotions; their ranges wow’d me. It was so easy to get lost in their storytelling, enabling me to sit back and enjoy this story.

Having learned how to follow along with the unique method of storytelling during the first book, I was able to easily jump into A Blight of Blackwings. And although it’s been over two years since the release of the first book, I had no troubles pick up and carrying on with this one. The story on whole is engrossing, made more so by the amazing narration. In the end, I enjoyed my time spend with Dervan, Fintan, and this fascinating world of the Seven Kennings. I found myself deeply engrossed in the stories and characters, and I look forward to finding out what happens next for the citizens of these lands.

Daryck is from a city that was devastated by the war with the Bone Giants, and now he and a band of warriors seek revenge against the giants for the loved ones they lost. But will vengeance be enough to salve their grief?

Hanima is part of a new generation with extraordinary magical talents: She can speak to fantastical animals. But when this gift becomes a threat to the powers-that-be, Hanima becomes the leader of a movement to use this magic to bring power to the people.

Koesha is the captain of an all-female crew on a perilous voyage to explore unknown waters. Though Koesha’s crew is seeking a path around the globe, Koesha is also looking for her sister, lost at sea two years ago. But what lies beyond the edges of the map is far more dangerous than storms and sea monsters. . . .

In this sequel to A Plague of Giants, these characters and more will become the voices of a new generation bringing hope and revolution to a war-torn world.

Reviews in the Series:
A Plague of Giants (Seven Kennings #1)