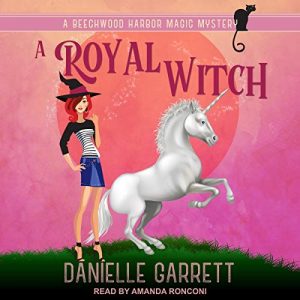 I write my review of A Royal Witch, the seventh title in the Beechwood Harbor Magic Mystery series, with mixed feelings. I’ve been following Holly, and also Scarlet (Beechwood Harbor Ghost Mysteries) and Anastasia (Touch of Magic Mysteries) for at least sixteen books. I’m invested in this world that Ms. Garrett has created, and for the most part, I enjoy the stories. But I feel that A Royal Witch was less than it could have been.

The mystery part of this story involves the kidnapping of a royal princess, who comes from a magical European kingdom and is under SPA (Supernatural Protection Agency) protection, staying at the Beechwood Manor. I enjoyed this part of the book. Holly, Adam, Nick, and the gang work with the SPA to find the princess and discover what happened. While Holly does find herself in a bit of danger, she does so with her friends and not as a renegade searching for answers. In this respect, Holly has matured over the course of the series, which I find encouraging. The mystery was interesting and exciting.

However, it’s all the rest that got me down. First, there were inconsistencies within the Beechwood Harbor universe, and that ALWAYS drives me nuts. While not significant to the outcome of the story, it bothered me enough to bring the grade of the story down a notch. Additionally, there were too many loose/open ends; situations that came forward in the course of the story that either were not mentioned again, or were not addressed by the conclusion of A Royal Witch. For example, early on in the book, new comer Harmony quizzes Holly (out of nowhere) about her dangerous ex, but after an awkward scene, it’s dropped and never resurfaces. What was the purpose of bringing him up? He’s not been in the series for a while. I won’t go into details over each issue because of spoilers, but when added up, it gave the book an incomplete feel. And finally, I am beyond frustrated with the Holly – Adam situation.

Narration: This is where A Royal Witch excelled! As always, Holly and her friends are brought to life through the performance of Amanda Ronconi, who has consistently done a wonderful job. Her interpretation of Holly is always spot on – a bit flustered and frazzled, but with an air of determination – just like Holly. Ms. Ronconi convincingly portrays Holly’s thoughts, concerns, and expressions. Her voices are all well-suited, and she gives paranormals their own fitting voices. However, I noticed that as the cast gets larger, some of the characters started sounding similar, but due to writing, I could usually tell them apart. And this time I was blown away with the “British” accented royal princess; something totally new and wonderful.

My Ratings
Story: C
Narration: A-

There are several new roommates in the Beechwood Manor, and one of them is a royal witch.

Unrest in a haven-ally magical kingdom leads a foreign princess into hiding and the Supernatural Protection Agency deems the Beechwood Manor as the perfect safe house—and Holly, her perfect guardian.

But with Holly’s business taking off and a new apprentice under her wing, a royal babysitting detail is the last thing she needs. Besides, the spoiled princess is adamant she can take care of herself. So who could blame her if her supervision is a little lax?

When tragedy strikes, the bratty royal’s problems land at the manor’s front door and it’s going to take all hands on deck if the paranormal roomies hope to make it out alive.