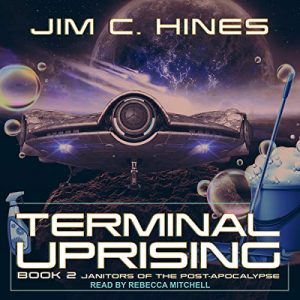 Picking up a few months after the conclusion of Terminal Alliance, Terminal Uprising brings listeners up to speed on unlikely heroine Marion “Mops” Adamopoulos and the crew of the EMCS Pufferfish. They are wanted by the Krakau Alliance for rebellion, but it’s really because they know the true cause of the virus that wiped out humanity, turning humans into mindless zombies. The group continues to receive support on the sly from Admiral Pachelbel, who puts the crew in touch with a genocidal Prodryan named Advocate of Violence, or Kate for short. The crew of the Pufferfish must return to Earth and uncover deadly secrets before it’s too late.

Terminal Uprising is an entertaining space adventure with a spunky heroine and her cast of unlikely heroes. Humans have been taught they are stupid and need the help of the Krakau to survive. I loved watching the crew come into their own, learning and growing beyond what they believed capable. Mops is a great character: one of those underdogs who is destined for more. The David to the EMC’s Goliath. I love how Mops thinks things through and how loyal she is to her crew. She was born to be a great leader and through this series of unfortunate events, she’s coming into her own. I enjoyed sitting back and listening to Mops figure it all out, never second guessing her analysis.

The side characters are equally fun and interesting. They each play their part and through Mops’s leadership, form a team and family. And though working as a team under stressful situations, each character grows and matures. Additionally, the story is filled with silly humor and fun pop culture references. I love the world building – how detailed each species is and the depth of the entire human history. The different creatures are creative and interesting.

Narration: Overall, the performance by Ms. Mitchell is solid and entertaining. The story is primarily shared via the third person POV of Mops, but it is also shared from the POVs of a couple of the supporting characters.  While the narrator maintains the same voice, Ms. Mitchell gives just enough variation between the different characters that I was able to know who was speaking just by voice. Additionally, the narrator gives each character it’s own suitable flair – the “mechanical” feel of the Grom, no-nonsense from Monroe, calm wonder from Kumar, and guns-blazing Wolff.

Terminal Uprising is an enjoyable and humorous tale with a lot of heart. I love the David versus Goliath story and how determined Mops is to survive and uncover the truth, while maintaining her morality and genuine kindness.

The Krakau came to Earth in the year 2104. By 2105, humanity had been reduced to shambling, feral monsters. In the Krakau’s defense, it was an accident, and a century later, they did come back and try to fix us. Sort of.

Between trying to protect their secrets and fighting the xenocidal Prodryans, who’ve been escalating their war against everyone who isn’t Prodryan, the Krakau have their tentacles full.

To discover the truth, Mops and her rogue cleaning crew will have to do the one thing she fears most: return to Earth, a world overrun by feral apes, wild dogs, savage humans, and worse. (After all, the planet hasn’t been cleaned in a century and a half!) What Mops finds in the filthy ruins of humanity could change everything, assuming she survives long enough to share it.

Perhaps humanity isn’t as dead as the galaxy thought.

Reviews in the Series:
Terminal Alliance by Jim C. Hines (Janitors of the Post-Apocalypse #1) – Audiobook Review