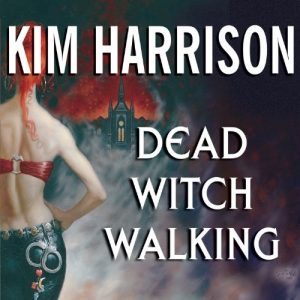 I thought since most people have warned me that Dead Witch Walking was a little slow due to all the world-building that I would give it a try on audio to see if I could get through it faster than reading it. And I’m glad I did listen to it. I think if I read it I would not have liked as much. The narrator took a little getting used to because at times she made Ivy sound like a drag queen, she made her voice too deep in some places. But I learned to just overlook her Ivy’s voice and I enjoyed the audio more once I did.

Honestly, I didn’t really know what to expect going into Dead Witch Walking other than the main character is a witch. I was pleasantly surprised by how much snark and humor was in the book. It really helped lighten the dark mood from time to time. One of the best sidekicks I’ve enjoyed in a long time was Jenks, the pixie who works with Rachel and Ivy.

The three team up to make their own company after Rachel and Ivy quit their jobs as runners for the I.S. Rachel’s boss is not happy when she quits and takes Ivy with her. In fact, her ex-employer is so unhappy that they put a hit out on Rachel. Ivy was able to pay off her employment contract so she’s safe but Rachel spends the whole book evading attempts on her life while trying to take down the bad guy in hopes that if she can take him down that it will cancel her contract and the I.S. will leave her alone.

Dead Witch Walking was a nice mix of action and snarky humor. I’m excited to continue the series to see what other trouble Rachel and her gang can get into.

My Ratings:
Story: B+
Narrator: A

Rachel Morgan is a runner with the Inderland Runner Services, apprehending law-breakers throughout Cincinnati. She’s also a witch, one of the many Inderlanders who revealed themselves after a genetically engineered virus wiped out 50 percent of humanity. Witches, warlocks, vampires, werewolves: the creatures of dreams and nightmares have lived beside humans for centuries, hiding their powers. But now they’ve stopped hiding, and nothing will be the same.

On the run with a contract on her head, Rachel reluctantly teams up with Ivy, Inderland’s best runner…and a living vampire. But this witch is way out of her league, and to clear her name, Rachel must evade shape-changing assassins, outwit a powerful businessman/crimelord, and survive a vicious underground fight-to-the-death…not to mention her own roommate!

Audiobook Review: The Good, the Bad, and the Undead 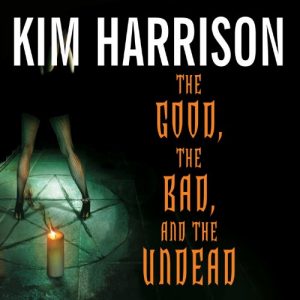 A fish called….Rachel. Rachel is floundering her way through life post the I.S.

I am really surprised by the amount of humor in this series and we get a lot of it in the opening scene where Rachel is on her current job; to steal back a fish, a were-team’s mascot.

Rachel is learning that being on her own is not all rainbows. She’s still dealing with Ivy’s weird vampire emotions; never knowing if Ivy is going to kill her or vein rape her.

Then there’s her consultant work with the FIB, where she’s helping in a serial killer case. But after messing things up on a murder scene, Rachel goes from trying to nail Trent as the killer to working with him. Speaking of Trent, we finally learn what he is.

With each book I find myself enjoying the world and characters more. With the exception of Nick, he is just too stupid to live when it comes to summoning demons. But with each summoning, I find that I like “Al” and with the events in The Good, the Bad and the Undead we are sure to see more of him.

To sum up The Good, the Bad and the Undead it’s a mixed bag of humor, blood and intriguing characters and unique world-building.

It took me a little bit to get into the narration but once it clicked for me I loved Marguerite Gavin’s narration of the books.  Her voice and delivery of Jenks is the best.

My Ratings:
Story: B+
Narrator: A

Rachel Morgan is back and in more trouble than ever! Fans of Laurell K. Hamilton and other vampire novels won’t want to miss the second novel in Kim Harrison’s addictive supernatural series.

Former bounty hunter Rachel Morgan has it pretty good. She has left the corrupt Inderland Runner Service and started her own independent service. She’s survived werewolves, shape-changing demons, bad-hair days, and sharing a church with her vampire roommate, Ivy. She even has a cute (if human) boyfriend – what more could a witch want?

But living with a reformed vampire isn’t all it’s cracked up to be, particularly when your roommate’s very bad ex-boyfriend wants her back and wouldn’t mind you in the process. And especially when he’s six feet of sheer supernatural seduction and you’ve got a demon mark that makes vampires literally hotter than hell.

To save herself and Ivy, Rachel must confront the vampire master – and the dark secrets she’s hidden even from herself.