Audiobook Review: Every Which Way But Dead 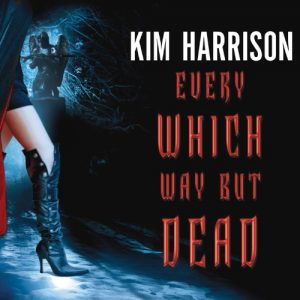 Rachel, Ivy, Jenks, Kisten, Al, and Trent are all back in Every Which Way But Dead.

Rachel is a mess and I love every minute of it. Let’s see, when we last saw her, she had received a couple of demon marks from Al, and she promised to be his familiar if he would help her bring Piscary to justice. So naturally, Rachel’s been trying to avoid Al by not going into the Ever After. Oh and she made her boyfriend, Nick her familiar by mistake.

After Rachel scares the crap out of Nick by using him as her familiar, he’s been distant, which has left Rachel feeling lonely and hurt. But have no fear there’s always other (better IMO) guys around who are both sexy and bad boys. Namely, a sexy blonde vamp named Kisten and an elven businessman, Trent.

Don’t worry. Rachel Morgan is no Anita Blake. She doesn’t juggle multiple men in her bed. She’s just a witch who’s good at her job as a runner (paranormal bounty hunter) but sucks (no pun intended) in the dating life department.

Rachel works a case and makes her life even more complaint. Will she never learn? If you like your heroines on the witchy side and just a little clueless (in a good way) then check out The Hollows series. It has a bit of everything from witches, pixies, vampires, weres, demons, and fae.

I’m a huge fan of Gavin’s narration of Rachel and the other characters. Her voice, tone, and pacing are perfect for this series. I don’t know that I would enjoy the books more if I read them. This is a series I will experience through audio to the end.

Some days, you just can’t win. Witch and former bounty hunter Rachel Morgan has managed to escape her corrupt company, survive living with a vampire, start her own runner service, and face down a vampire master.

But her vampire roommate, Ivy, is off the wagon; her human boyfriend Nick is out of town indefinitely and doesn’t sound like he’s coming back, while the far-too-seductive vampire Kisten is looking way too tempting; and there’s a turf war erupting in Cincinnati’s underworld.

And there’s a greater evil still. To put the vampire master behind bars and save her family, Rachel made a desperate bargain. Now there’s hell to pay: literally. For if Rachel cannot stop him, the archdemon Algaliarept will pull her into the sorcerous ever-after to forfeit her soul as his slave. Forever.

Audiobook Review: A Fistful of Charms 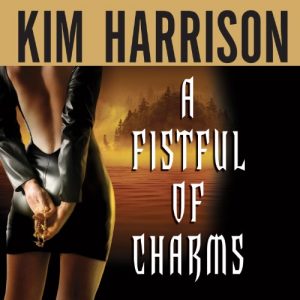 JENKS!! Got to love a pixie that uses Tink (Tinkerbell) as a curse.

In A Fistful of Charms, Rachel and Jenks hit the road in order to save one of Jenks’ sons. Oh and Nick (Pfft). The last time Rachel saw Nick he was leaving town and wouldn’t tell her the whole reason he was leaving. Jenks’ son, Jax was living at Nick’s place to take care of his plants while he was out-of-town.

Jenks and the rest of his pixie family left the church Rachel and Ivy share as their home because of a fight he and Rachel got into during the last book, Every Which Way but Dead. It’s been a long winter without the pixies around and Rachel is sick of Jenks not talking to her. So when they get word from Jax that Nick is missing and Jax needs help they drop their differences and hit the road to save them.

In true Rachel form, this is no simple road trip. There are vampires and werewolves and of course Rachel fighting for her life but she has her trusty backup, Jenks. And Jenks is very much front and center in a big way.

We didn’t get to see Trent this time, but my fingers are crossed he will show up in the next installment, For a Few More Demons. I’m hoping we get to see more of Al as well.

Rachel is a kick-ass witch but at the same time, she borders on “too stupid to live” but in a funny and endearing way. With the help of her friends, Rachel learns why she makes some of the dumb choices in her personal life. And knowing is half the battle, right?

JENKS!! One of the best secondary characters ever! And he summed up my feelings about Nick in this quote…

“No one cares little green turds about you.”

Jenks is a cocky and snarky pixie who’s always there for his partners Rachel and Ivy. He would die to save Rachel and his family. And I think he feels the same about Ivy but he hides it.

I’m not sure if it’s Gavin’s narration or Harrison’s writing that keeps me coming back. I think it’s a little of both. I can’t picture myself reading this series now that I’m hooked on Gavin’s voice for the series. She does an amazing job for all the characters. Her voice for Rachel and Jenks is the best.

The Hollow series gets better with each book. I’m really enjoying the snarky humor and the building relationships between the characters.

The evil night things that prowl Cincinnati despise witch and bounty-hunter Rachel Morgan. Her new reputation for the dark arts is turning human and undead heads alike with the intent to possess, bed, and kill her – not necessarily in that order.

Now a mortal lover who abandoned Rachel has returned, haunted by his secret past. And there are those who covet what Nick possesses – savage beasts willing to destroy the Hollows and everyone in it if necessary.

Forced to keep a low profile or eternally suffer the wrath of a vengeful demon, Rachel must nevertheless act quickly. For the pack is gathering for the first time in millennia to ravage and to rule. Suddenly, more than Rachel’s soul is at stake. 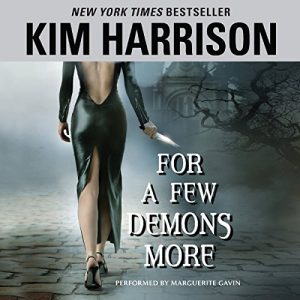 For a Few Demons More, in my opinion, anti-climatic and not the snob fest I was warned it would be.

I liked that one of the big bads was taken out this time around. Too bad two of them weren’t. But there has to be a bad guy and if they all were taken out we would just get another one. But if only one could go in this installment I’m glad it was the one that did.

I like how the events in For a Few More Demons are building to something more for the series. Rachel and her gang are never boring.

I’m sick of the push and pull of Rachel and Ivy’s relationship. Either get it on with Ivy or leave her alone already. Geez. It’s weird and uncomfortable. They need to hit the sheets or one needs to move out.

“I don’t play well with others and I run with loaded guns.”

“That’s my girl… “ “You call me your girl one more time and I’m going to turn your gonads into plums and make jam with them.”

Gavin has earned a place on my favorite narrator list with her work on The Hollows series. She is Rachel Morgan. I’ve already downloaded the next audio from the library but I’m a little worried since it has a different narrator.

Despite dating one vampire and living with another, Rachel Morgan has always managed to stay just ahead of trouble…until now.

A fiendish serial killer stalks the Hollows, and no one living in or around Cincinnati – human, inhuman, or undead – is safe.

An ancient artifact may be the key to stopping the murderer – a mysterious relic that is now in the hands of Rachel Morgan, fearless independent bounty hunter and reckless witch. But revealing it could ignite a battle to the death among the vast and varied local supernatural races.

Rachel’s been lucky so far. But even she can’t hide from catastrophe forever.