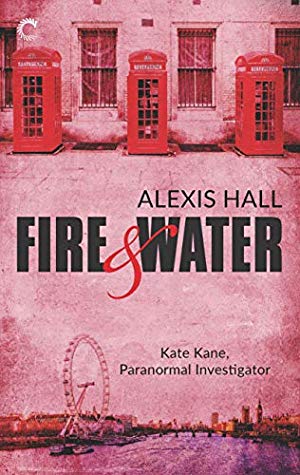 I adore the Kate Kane stories and was happy when I learned that the third in the series, Fire & Water, was in the works. I was fortunate enough to be able to reread the first two novels (Iron & Velvet and Shadows & Dreams) recently during their respective re-releases, which I found to be extremely helpful. Much to my delight, Fire & Water was as wonderful as I’d hoped. It was also rough. In all the best ways, but still—rough.

Fire & Water picks up six months after the previous time the world almost ended, and Kate is once again at the center of a battle that’s drawn every magical/paranormal faction in London (even the US is represented) out of the shadows. Hired by the Merchant of Dreams to reacquire their stolen property, Kate winds up with her loyalties divided and her friends, exes, flatmate, and self at risk should things go badly. Which they absolutely and thoroughly do.

One thing I was particularly happy to discover hadn’t changed in Fire & Water is how much I continue to love Kate. As exasperating as most of the other characters claim to find her, it was nice to see so many of them show up for her when it counted. That everyone who knows anything refuses to be straightforward with her about what’s really happening, then gets peeved with her for not being omniscient herself makes it difficult not to be on Kate’s side. In fact, Kate’s internal struggles with her more decorum-defying rejoinders at such moments comprise some of my favorite passages. It may also be wrong, but I think Kate shines brightest when even her own hindsight seems to have been drinking excessively, and her best option is just to leap straight into whatever chaos is looming, regardless.

Another aspect of this series that has consistently fascinated me is that the characters are obviously pieces in a game Kate knows is being played, even if she can’t pin down what it is. And just when it seems she’s figured it out, everything changes leaving her fighting an entirely different battle than the one she began. It doesn’t seem so much that the pieces themselves have shifted erratically, but rather that the stratagem itself and/or the master behind it has. I think it is a risky bit of writing that could easily fall apart were it a different character in any other author’s hands. Yet, not only does this arrangement still work well in Fire & Water, but the potential losses if Kate fails make the narrative all the more compelling.

As was true with the previous titles in the Kate Kane series, I don’t believe Fire & Water will be for everyone. Kate is difficult and unique and often as resentfully sweet as she is razor-sharp. As complicated as her relationships always are, the question here more pointedly asks which other characters are on Kate’s side because she is useful, rather than loved—and sometimes the answer hurts. Having said that, I’m going to have to read it again as soon as possible. Given the breadcrumbs left and new uncertainties introduced at the end of Fire & Water, I’m very hopeful that there will be another in the series not too far in the future.

Ten years ago I fought for the Witch Queen of London in a mystical showdown against a King Arthur wannabe with a shaved head and a shotgun. Back then, the law did for him before he could do for us.

As if the mother of all wizard battles wasn’t bad enough, fate or destiny or a god with a really messed-up sense of humor has dropped a weapon that could rewrite the universe right into the middle of London, and anybody with half a sniff of arcane power has rocked up to stake their claim on it. Last time this happened, the city went to pieces. This time, it might just go to Hell.

Also, still dating a vampire. Still got an alpha werewolf trying to get in my pants. Still sharing a flat with a woman made of animated marble—only now apparently there are two of her. But you know what they say: the more things change, the more they stay the same crap that’s been trying to kill you your entire life.