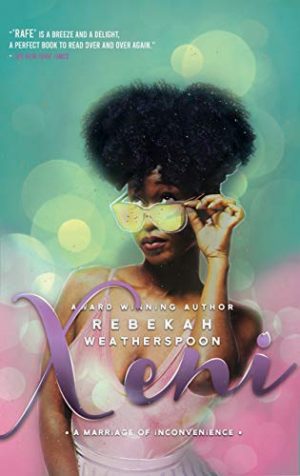 Xeni is in upstate New York dealing with the death of her beloved aunt when she discovers a huge family secret that has been the source of family drama for years. Upsetting as the revelation is, she also finds out her aunt was a millionaire and left most of her estate to Xeni, on the condition that she marry Mason and stay married for 30 days.

Mason moved to the small town in New York seven years ago, escaping his abusive father. Living with his cousin and his family, Mason befriended Ms. Sable after they learned of their mutual love of music. He is both surprised and grateful to his dear friend for leaving him enough money to pay off his debts and doesn’t mind the condition of marrying Sable’s niece if it means he can help her out.

After absolutely enjoying Rafe, I was excited to read Xeni, Ms. Weatherspoon’s second offering in her Loose Ends series. While the books in this series are loosely related to previous books by the author, one does not need to read them in order to enjoy Rafe or Xeni. New readers, like me, were introduced to Xeni in Rafe; she is the best friend of main character, Sloan.

Off the bat, I felt that Xeni took a little more time to get into the story (when compared with Rafe). Xeni’s life is a mess, but she’s great at self-regulating-knowing what will set her off and finding time to herself to calm down. I love this and how strong and self-assured Xeni is. She’s so focused on the mess of her life that she doesn’t fall for Mason for a bit, which is completely understandable, but made it harder for me to get into their romance.

That said, once the pair started connecting, both emotionally and physically, I was invested. Xeni and Sloan work because of their intense mutual attraction and the energy that flows between the pair. They are both slightly damaged adults who’ve had enough with the crap in their lives, and decide to embrace the madness of their situation. They decide to enjoy their wedding, and the pair develops an intense bond, opening up to one another in ways they hadn’t with previous partners and friends. Even when they hit bumps, they talk over what set them off, giving space when needed, but coming back together.

And it was at this moment that I completely fell for the Scottish giant:

[Mason toasting Xeni] “To you and the strength and the vulnerability you’ve showed me the last few days. Just met and you’re already making me want to be a better man.” (Kindle edition, 63%)

Xeni is another wonderful story from Rebekah Weatherspoon, who is quickly becoming a favorite, must-read author. I look forward to more stories from the Loose Ends series and beyond.

She just wanted to claim her inheritance. What she got was a husband…

Xeni Everly-Wilkins has ten days to clean out her recently departed aunt’s massive colonial in Upstate New York. With the feud between her mom and her sisters still raging even in death, she knows this will be no easy task, but when the will is read Xeni quickly discovers the decades old drama between the former R&B singers is just the tip of the iceberg.

The Secrets, lies, and a crap ton of cash spilled on her lawyer’s conference room table all come with terms and conditions. Xeni must marry before she can claim the estate that will set her up for life and her aunt has just the groom in mind. The ruggedly handsome and deliciously thicc Scotsman who showed up at her aunt’s memorial, bagpipes at the ready.

When his dear friend and mentor Sable Everly passed away, Mason McInroy knew she would leave a sizable hole in his heart. He never imagined she’d leave him more than enough money to settle the debt that’s keeping him from returning home to Scotland. He also never imagined that Sable would use her dying breaths to play match-maker, trapping Mason and her beautiful niece in a marriage scheme that comes with more complications than either of them need.

With no choice but to say I do, the unlikely pair try to make the best of a messy situation. They had no plans to actually fall in love.