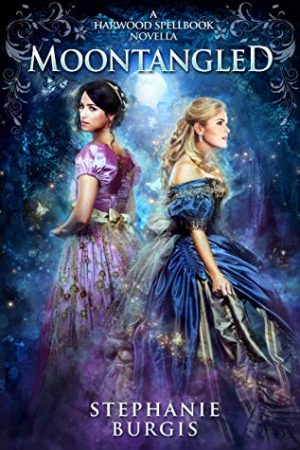 Spells shot across the room, sparkling and fizzing. Fireworks made of light showered overhead, letting off deafening cracks of thunder. Different gowns squared off against each other in mid-air as different women wrested magical control of each. Shawls wrapped themselves tightly around gowns and were beaten away with mask-ribbons.

It was an all-out, five-person magical duel of light and noise and the kind of joyous, childish silliness that Juliana had never once experienced before she’d arrived here as a full adult, finally safe and free and—

Every piece of clothing fell to the floor as five young women froze in mutual, overwhelming panic.

Cassandra Harwood, the forbiddingly famous, undeniably powerful, and terrifyingly inspiring headmistress of Thornfell College of Magic, stood in the open doorway of Juliana’s bedroom, one brown eyebrow raised as she surveyed the glittering destruction.

Juliana stared at the woman she’d hero-worshipped for nearly all her life and felt her throat go dry. “I…ah, Miss Harwood, we were—I mean…”

Frantic glances flew across the room. Ariana said, “We…were preparing for the ball together?”

“So I see.” Miss Harwood’s lips twitched. “And so I heard from the rooms below, where we are currently entertaining the most prominent gentryfolk of the county, along with our carefully invited visitors from across the nation…and telling them all what serious, trustworthy, and responsible students we are training as Angland’s first class of lady magicians.”

“Next time,” said Miss Harwood firmly, “practice your muffling spells at the same time as your dueling skills, if you please.” Shaking her head, she stepped backwards. “And do make certain your rooms are respectable by the time you leave for the ball tonight, or our poor housekeeper will tear her hair out, and we’ll all be left with sticks for breakfast.”

The door shut behind her. All five women slumped.

“Phew.” Sujana threw herself back on the bed, spreading herself starfish-like across the scattered clothes. “I haven’t had such an entertaining battle since the last time my cousins came to visit.”

“You mean last weekend?” Willa patted her vivid scarlet gown and black chignon back into place. “I thought I heard a ruckus from your room while they were there.”

Anne was already picking up the clothes from across the floor. “How long do we have left?”

“Well, if the guests are already here, then…” Ariana’s voice chirped on, bright with interest, but Juliana couldn’t take in a single word that followed.

The guests are here.

After all these months apart, Caroline was actually here. In this house. In the floor just below.

She’s back. Memories cascaded over Juliana from the last visit, when the ruling Boudiccate had assigned Caroline Fennell, the assistant to one of their own most famous members, to their inspection team for Thornfell College of Magic.

Warm breath brushing softly against Juliana’s throat, tingling against the sensitive skin behind her ear as sensations overwhelmed her from every angle…

Warm hands sliding possessively up her sides, unbuttoning the bodice of her gown with eager fingers. “Finally…”

And then that glassy-eyed, utterly distant look just one night later, when Juliana had slipped into Caroline’s bedroom after everyone else had finally fallen asleep. She’d been so desperate to seize their last possible moment together before Caroline was sent off on her next political assignment…

But the woman who’d been her secret fiancée for years had looked up with a frozen, unnatural expression from the bed, and she had slowly shaken her head. “I don’t think this is a wise idea. Do you?”

A stab of pain pierced Juliana’s fingers now, and she belatedly realized that she had been clenching them.

Inside, she’d been clenched with panic ever since that moment, months ago, when she’d backed away in shocked silence and allowed the door to fall closed between them without even knowing why.

Stephanie Burgis grew up in Michigan but now lives in Wales, surrounded by mountains, castles, and coffeeshops. Her Harwood Spellbook series began with Snowspelled, which Ilona Andrews called “clever, romantic, and filled with magic.” She writes wildly romantic historical fantasies for adults and fun, funny MG fantasy novels for children (most recently including the Dragon with a Chocolate Heart trilogy). Find out more on her website: www.stephanieburgis.com