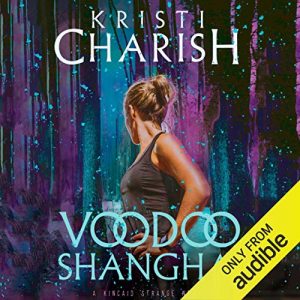 I learned on Kristi Charish’s Instagram that Voodoo Shanghai would be the last book in the Kincaid Strange series. Which made me sad and also made me wonder if we would be a clean wrap up at the end of this installment. The way Voodoo Shanghai ended leads me to believe she did not know her publisher would not pick up another book. It ends on a huge cliffhanger. I’m hoping maybe we will see at least one more installment via self-publishing.

The Kincaid Strange series is truly a great and unique urban fantasy series. Don’t let the fact that it was “canceled” stop you from trying it. I believe it’s an unsung series that needs more attention. It has everything a UF fan wants, a strong and likable heroine, action, a mystery to solve in each installment and with Voodoo Shanghai, Ms. Charish had me guessing who the killer was to the very end (I usually figure out the bad guy within the first few chapters of about 90% of the books I read).

Kincaid is working with the FBI on a murder case that takes her from Seattle to Portland. They believe it’s a cut and dry case of a serial killer, but she’s not so sure. With the help of her ghost friend and roommate, Nate (90’s grunge rocker), Gideon (a ghost who is training her on more advanced skills) and FBI agent Wolf she works the case to find out the whole story of the murder and missing ghosts in the Portland area all while trying to not becoming one of the missing herself. As I mentioned, Charish does a great job weaving the mystery into a hard to guess “who done it” that includes paranormal creatures such as ghosts, zombies, poltergeist, and witches.

While the case is wrapped up there are unfinished storylines within the series do to the cliffhanger. I really want to know what happens next. Fingers crossed that Ms. Charish continues The Kincaid Strange series at some point.

The Kincaid Strange series is an audio-only series for me all thanks to Susannah’s brilliant delivery of the characters. After becoming a fan of Susannah’s narration work on this series I plan on trying more of her work. Fans of Khristine Hvam would surely enjoy Susannah’s voice and pacing as they have a similar sounding voice.

My Rating:
Story: A
Narration:  A+

The third and final installment in Kristi Charish’s thrilling urban fantasy series finds beloved heroine and voodoo practitioner Kincaid Strange shanghaied away from Seattle and pursuing the ghost of a serial killer in Portland.

Just when Kincaid Strange thinks her life is back on track and she’s finally put her time as a paranormal practitioner with the Seattle PD to rest, her ex (and Seattle cop) Aaron asks her for help with yet another strange and ominous case. Martin Dane, the White Picket Fence Serial Killer who terrorized West Coast families living the suburban American dream, appears to be back at it with a fresh murder in Portland. There’s only one problem: Dane has been dead for three weeks.

Kincaid can’t resist a paranormal mystery. Despite her misgivings, she agrees to examine the Portland crime scene. What she discovers is a place of supernatural power unlike anywhere she’s ever been–and the reason Aaron had been so tight-lipped about the case details. There’s already a voodoo practitioner on the scene: Liam Sinclair, a TV celebrity of questionable talent and dubious intent.

Kincaid wants nothing more than to finish the job and retreat to Seattle, but the deeper she looks, the less the murder adds up. When she uncovers a much more sinister mystery–missing ghosts, scores of them, whom no one is looking for–there’s no turning back.