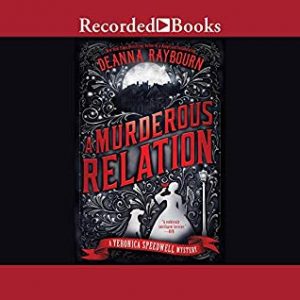 A Murderous Relation opens shortly after the conclusion of the previous book, with Veronica and Stoker returning home and plans to consummate their relationship now that they have admitted their feelings for one another. However, before they can do anything, they are summoned to attend Lady Welly on an important matter. There they meet Princess Alexandra of Denmark (Veronica’s stepmother) who asks Veronica to help protect her eldest son, Eddie, by stealing a diamond he gave to a less-than-reputable woman. On top of that, the Whitechapel Murderer (aka Jack the Ripper) has London in a panic and all of Scotland Yard working overtime to catch the murderer. When Veronica and Stoker realize there may be a tie between the prince and the Ripper, they decide to get involved with Lady Welly’s call to protect the prince.

The Veronica Speedwell mysteries are some of my favorite stories. The mystery is always foremost in the books, and I love getting inside Veronica’s mind as she intelligently works her way through the clues. This time around, the book had minor mysteries broken into chunks, to form one cohesive plotline. At times, the book was more action adventure for Veronica and Stoker as they work against the clock to keep Prince Eddie safe. Their escapades are exciting and the supporting characters shine, creating a riveting read/listen.

My favorite parts of this one include the time Veronica spends with her half brother, Prince Eddie. I like that he’s understanding both of her plight and the need to keep her a secret, yet embraces her as family whole-heartedly. It was nice to see her have genuine interactions with a family member, rather than the guarded interactions she’s had with the other royals, including her father’s wife in this one.

Another character I have always admired is Lady Welly, who has played a part in Veronica’s recent life, pulling strings while protecting the Royal family. But the more we get to know her, the more I realize she’s always going to put preserving the monarchy above all else, and it gives her an edge. I appreciate Veronica pragmatic view of Lady Welly, but I thought it was selfish and cruel that Lady Welly put Veronica in the position to help her royal relatives, knowing how carelessly the family treats Veronica’s emotions while she’s done so much to help them. I felt the author did a fabulous job bringing out both the sweet and serious nature of Lady Welly, and I adore Veronica even more for how she dealt with the whole situation.

And as a romantic, I cannot hide the fact that Veronica and Stoker together is a “dream come true” for this fan. I was worried that their romance may be pushed aside for the sake of the mystery, but the author gives the storyline just the right amount of page time. From Veronica fretting over how Stoker reacts, to the final chapter of the book which made me tear up and laugh out loud, the author pens a true made-for-each-other pairing.

Narration: Ms. Masters’s performance of Veronica is perfect. She nails Veronica’s no nonsense and adventurous attitude. But she also captures Veronica’s just-under-the-surface vulnerability. Additionally, she gives Stoker a sexy, unfettered gruffness that sharpens with concern when Veronica is in danger or when the pair is sparring. Ms. Masters’s range of accents is excellent and sound authentic to this untrained ear, changing it up for regional and socio-economical conditions. I enjoyed her Irish brogue and French accented English most. She brings the characters and action to life, allowing me to feel as if I’m part of the adventure.

In the end, A Murderous Relation is an excellent addition to the Veronica Speedwell series, and I cannot wait to see what adventure comes next for Veronica and Stoker.

Veronica Speedwell and her natural historian colleague Stoker are asked by Lady Wellingtonia Beauclerk to help with a potential scandal so explosive it threatens to rock the monarchy. Prince Albert Victor is a regular visitor to the most exclusive private club in London, known as the Club de l’Etoile, and the proprietess, Madame Aurore, has received an expensive gift that can be traced back to the prince. Lady Wellie would like Veronica and Stoker to retrieve the jewel from the club before scandal can break.

Worse yet, London is gripped by hysteria in the autumn of 1888, terrorized by what would become the most notorious and elusive serial killer in history, Jack the Ripper–and Lady Wellie suspects the prince may be responsible.