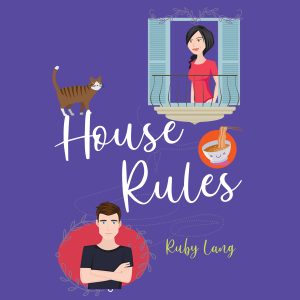 Lana and Simon were married many years in the past, but Lana left Simon to find herself. The pair hasn’t been in contact for the past 17 years, although they tried to keep tabs on one another without being obvious. Present day, Lana has returned to New York and is looking for a place to live. Meanwhile, Simon needs to move – his rent-controlled apartment is in bad shape and his neighbors are under construction, making it difficult to live in his place. After running into one another on the hunt for an apartment, Lana reaches out to Simon when a wonderful place, too expensive for one, comes available, and the pair end up flatmates.

House Rules is a delightful second-chance, mature-character romance. I adore both Lana and Simon, and watching them reconnect is heart-warming. While there is an aspect of nostalgia, I love that the characters have both matured and realize that they like each other as they are now, not as distant, happy memories of the past. While not filled with much conflict, the couple does have a bumpy road. Even though both have grown, there are still aspects of their personalities that will limit their future without some adjustment and compromise. I sniffled a time or two as that realization set in for the characters.

Narration: The story is shared via the third person POVs of Simon and Lana. The shared narrator for both characters is distinctly female, but the voice is on the deeper side, and remains soft, calm, and concise. The narrator adjusts the dialogue from the narrator to each character, with each having a unique voice. While there is a definite difference between genders, I could not always hear a big difference between character to character within the same gender. That being said, some characters stand out quite a bit, those with big personalities having big voices. EWZ does a great job getting in the emotions. Both characters are older, worn down by life, but excited by the reunion. I felt that EWZ really nailed that aspect with her performance.

House Rules is an enjoyable listen. I love the aspect of second chance and how the characters realize that it’s the here and now rather than the past that fills them with love.

ROOMMATE WANTED to share a gorgeous sun-filled apartment in Central Harlem. Must love cats. No ex-husbands or wives need apply.

Seventeen years ago, different dreams pulled Simon Mizrahi and Lana Kai apart. But when Lana takes a position as a chef back in Manhattan, her apartment search puts her right in her ex-husband’s path. Music teacher Simon is also hunting for a new place to live, and when Lana proposes they be platonic roomies, well…it’s not the worst idea he’s ever heard.

A sunny uptown two-bedroom sounds far more appealing than the cramped, noisy space where he’s currently struggling to work. Still, Simon has seen firsthand that Lana’s a flight risk, so he agrees on a trial basis.

Living together again feels wonderfully nostalgic, but when the ex-couple’s lingering feelings rise to the surface, the rules go out the window.

Of course, chemistry was never their problem. But while Simon’s career feels back on solid footing, Lana is still sorting out what she wants. With their trial period soon coming to an end, they’ll have to decide if their living arrangement was merely a sexy trip down memory lane or a reunion meant to last.