Murder at the Arts and Crafts Festival 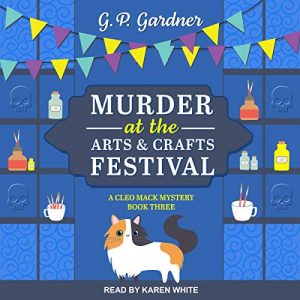 Murder at the Arts and Craft Festival is the third story in the Cleo Mack Mystery series. This entertaining cozy mystery series has quickly become a favorite of mine. Cleo is just under a year into her new life at and position as director of Harbor Village; she has great friends, a serious romantic relationship, and is comfortable in her job. The story opens with the preparations for the upcoming arts festival that hosts over 300,000 people. We are introduced to new characters who run in artistic circles, as well as catch up with the exciting supporting cast. The sister of one of the residents dies after attending a party at Harbor Village and the police suspect poisoning. Cleo needs to ensure the food her kitchen prepared isn’t the cause, and there is a Washington Post reporter snooping around the complex, keeping Cleo on her toes. The author continues to do a wonderful job sharing Cleo’s experiences, allowing the reader to learn while enjoying the information.

The mystery was a bit different than previous cases. First, Cleo and the gang are more actively involved with trying to find out who may have poisoned Twinkle rather than allow the circumstances to present themselves over time. I loved listening to the group piece the parts together, but it was obvious to me that Cleo was fixated on the wrong person. I felt like there wasn’t a strong enough case for anyone but who the actual killer was, so it was a bit irksome how easily this person was removed from the suspect list. It also had a twist at the end that I cannot share without spoilers; however, it did end very differently than I anticipated, which was a nice surprise.

I really enjoyed how the author allows us to see the world as Cleo sees it – providing so much description and attention to the world around Cleo. She’s smart, but she shares her thoughts rather than holds on to information or theories, and she relies on others to help her. It’s refreshing and enjoyable. The romantic troubles Cleo experiences adds emotional depth to the story. I admire the charcter as a person and love eavesdropping on her day. I like that her troubles aren’t overdramatic or unrealistic. She deals with life in a manner much like I would. She’s both thoughtful and emotional.

Narration: The stories are shared via the first person POV of Cleo. Karen White continues to bring life to Cleo. Her voice for the narrator/Cleo is strong and confident, just like Cleo is written. Ms. White alters her voice for dialogue, adjusting for age, gender, and regional dialect. Her female charters are slightly stronger than her male characters, with each being distinguishable from the other. I can clearly tell who is talking based solely on their voice. Overall, she performs the story wonderfully, keeping me engaged and interested.

Murder at the Arts and Craft Festival is another great mystery and story. I feel like an honorary member of Harbor Village. I love the little details of Cleo’s life. It’s her life outside the mystery that I’m most enjoying – how she’s turning around Harbor Village and making friends.

It’s late March in Fairhope, Alabama, and artists from around the country are flocking to the bayside town’s Arts & Crafts Festival. The annual tradition has something for everyone, only this year, the main attraction is murder . . .

Cleo Mack’s life has been a whirlwind since she inadvertely became the executive director of Harbor Village, a retirement community bustling with energetic seniors. Juggling apartment sales, quirky residents, and a fast-moving romance is tricky business. But on-the-job stress develops a new meaning when Twinkle Thaw, a portrait artist known to ruffle a few feathers, arrives unannounced for the weekend’s festival and drops dead hours later—mysteriously poisoned . . .

Twinkle’s bizarre death doesn’t seem like an accident. Not with a sketchy newcomer slinking around town and a gallery of suspects who may have wanted her out of the picture for good. As Cleo brushes with the truth, she soon finds that solving the crime could mean connecting the dots between a decades-old art heist and an unpredictable killer who refuses to color inside the lines . . .