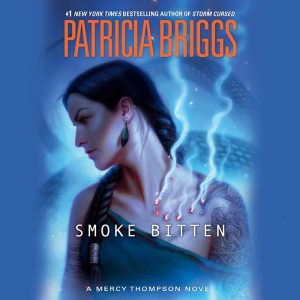 Following the events of Storm Cursed, Smoke Bitten starts out a bit rough, but ends in triumph. The story opens in a manner that was difficult for me. First, we discover that something is going on with Adam, and he’s shut down the mating bond with Mercy. Second, a certain ex-wife is meddling again. She’s not happy with Jessie’s decision to stay local for college and manipulates the situation to Mercy’s disadvantage. Why? Why are we going through these types of troubles AGAIN? While most of the issues were sorted out by the end of the second chapter, it frustrated me that the book even went down that path.

By Chapter 3, we start to get into the heart of the story. There is a mysterious “smoke monster” that has the ability to take over a person with a bite, eventually killing him/her. Underhill (land of the Fae) has manifested as Tilly, a young girl, and has built a door in Mercy’s backyard so she can visit Aiden whenever she wants. There is a group of invading werewolves who may be looking to take over Adam’s pack. And maybe most troubling, vampire Wolfe is stalking Mercy in a playful, yet creepy, manner. All of this is more than enough to deal with, but with Adam on edge and refusing to open the mating bond, Mercy has her hands full.

Smoke Bitten is another wonderful adventure for Mercy and friends. Once again, we see her work with her allies and those she doesn’t necessarily trust. I appreciate her knowledge and moral compass as she works hard to protect those she loves, while piecing together the smallest of clues in order to determine how to stop the new threats. I love that while not physically strong or dominate, she packs a surprising punch and can hit the bad guys where it hurts. She’s smart and thinks things through, but sometimes she reacts without thinking, later reflecting on the consequences of her actions. While Smoke Bitten didn’t pack the emotional punch of its predecessor, Storm Cursed, I still enjoyed watching Mercy and Adam work through their problems. My only other complaint is that Mercy somewhat often retreats to her “other” space (an internal, spiritual space) during times of crisis, and through this is able to “magically” fix things. The concept is interesting, and we learn a lot about Mercy and her relationships with others, but it also felt a little too easy, too often.

Narration: Lorelei King IS Mercy to me. As soon as I hear that first sentence, I fall into a familiar happy place. Ms. King nails everything about Mercy from her confidence to her uncertainty; from her love for Adam to her distrust of those outside her inner circle. She is young yet wise, which all comes through in Ms. King’s performance. But it’s not just Mercy, Ms. King alters her voice effectively to convey a large cast of characters, each with his or her own voice, accent, emotional responses, and inflections. My favorite this time around was Ms. King’s portrayal of Tilly, whom she gives a creepy, childlike voice that is playful yet threatening. I cannot sing enough praise for Ms. King’s narration of the Mercy Thompson series.

Even with some of my issues with the overall Mercy Universe, the Mercy Thompson series remains one of my favorites. The stories are smart and exciting, with interesting mythology and characters.

Mercy Thompson, car mechanic and shapeshifter, faces a threat unlike any other in this thrilling entry in the #1 New York Times bestselling series.

I am Mercedes Athena Thompson Hauptman.

My only “superpowers” are that I turn into a thirty-five pound coyote and fix Volkswagens. But I have friends in odd places and a pack of werewolves at my back. It looks like I’m going to need them.

Centuries ago, the fae dwelt in Underhill–until she locked her doors against them. They left behind their great castles and troves of magical artifacts. They abandoned their prisoners and their pets. Without the fae to mind them, those creatures who remained behind roamed freely through Underhill wreaking havoc. Only the deadliest survived.

Now one of those prisoners has escaped. It can look like anyone, any creature it chooses. But if it bites you, it controls you. It lives for chaos and destruction. It can make you do anything–even kill the person you love the most. Now it is here, in the Tri-Cities. In my territory.

Not if I have anything to say about it.