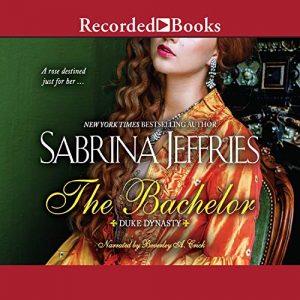 The Duke Dynasty is a wonderful historical romance series about a dowager duchess who was married and widowed by three different dukes. She has five grown children – three are dukes themselves. The Bachelor, the second full-length book, features her only daughter, Gwyn, and Joshua, the nephew of her deceased third husband.

Gwyn had a brief affair ten years ago with a man who turned out to be a scoundrel. Now that she’s being presented to society (at the age of 30), he’s returned to blackmail Gwyn. Afraid that her brother will discover the truth, she lies about why Lionel Malet has returned, which leads her brother to hire Joshua Wolfe as her bodyguard.

Josha has been living on his grandfather’s land, helping the current duke while on half-pay leave with the Royal Marines. A war injury has severely limited the use of one leg, yet Joshua hopes the War Department will agree to bring him back to work. So when he is offered a position as Gwyn’s bodyguard, he makes plans to visit the War Secretary while in London.

Gwyn and Joshua have been acquainted for several months, and when they first met, Gwyn tried to let Joshua know she was interested in him, but he ignored her flirtations and kept his distance. Meanwhile, Joshua doesn’t trust the noble class, even though his grandfather was a duke. This creates a distance between the pair. However, that distance doesn’t hold under the weight of their strong mutual attraction. Yet Joshua knows Gwyn is keeping secrets, and the pair plays games with one another to try and get what each wants.

Similar to the first book, Project Duchess, The Bachelor features a relationship that begins with a lack of trust, leading to a romance filled with a series of semi-misunderstandings and bad assumptions, causing each to lash out at the other. This really frustrated me a couple of times. However, as each learns to open up and trust, their bond increases, as do the sexy times. I like when the pair works together to discover the truth and bring down Malet. I also love that both characters are equally strong-willed.

Narration: The story alternates between Gwyn and Joshua’s third person POVs, and Beverley A. Crick does a wonderful job. She has a delightful British female narrator for both Beatrice and Grey’s POVs. The dialogue is adjusted slightly based on gender, age, and station. Her female voices all light but slightly different. Her males are deeper and convincingly masculine. To this untrained ear, the accents appear to be appropriate for the setting and period. My biggest complaint is that at times (but not always) there were longer-than-average (or necessary) pauses between speakers during times of conversation. I don’t know if this is because of Ms. Crick’s performance or due to editing.

In the end, I continue to enjoy the Duke Dynasty series. I just love the concept of three duke siblings, each finding their own HEA. Plus, there is an apparent danger following the dowager duchess and her children, with each book bringing a few clues. The mystery continues, and I look forward to seeing who will find love next!

Lady Gwyn Drake has long protected her family’s reputation by hiding an imprudent affair from her youth. But when her former suitor appears at Armitage Hall, manhandling the heiress and threatening to go public with her secrets, it’s Gwyn who needs protecting. Her twin brother, Thorn, hires Joshua Wolfe, the estate’s gamekeeper, to keep her safe in London during her debut. As a war hero, Joshua feels obligated to fulfill the assignment he has accepted. But as a man, it’s torment to be so very close to the beauty he’s fought to ignore…

With handsome Joshua monitoring her every move, Gwyn would prefer to forget both the past and the parade of money-seeking bachelors at her coming out. But Joshua is unmoved by her attempts at flirtation, and the threat of blackmail still hangs over her. With danger closing in, Gwyn must decide which is the greater risk: deflecting a scoundrel’s attempts to sabotage her–or revealing her whole heart to the rugged bodyguard she can’t resist…