Audiobook review: The Inside Track by Tamsen Parker 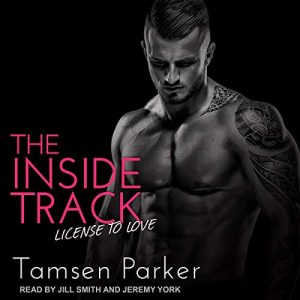 As was the case with Thrown Off Track, the previous title in the License to Love series, listening to the audiobook was my first encounter with this story. Having seen Nick in action several times previously, I thought I’d be able to guess where the narrative was heading from the start, but I was pleasantly mistaken. There was actually a lot in The Inside Track that surprised me quite a bit, possibly making it my favorite of the series so far.

Something that made The Inside Track so different is that one of the main characters (rather than a more minor one) lives with debilitating agoraphobia, giving the author plenty of space to present a fairly thorough look at what doing so might be like. A former child star who managed to reinvent herself after things went very, very wrong, Dempsey knows exactly who she is and has unapologetically constructed the life she needs to live. Now in her thirties, she owns the woman she’s become, and I found respecting her an easy thing to do.

While Christian from Thrown Off Track is still my favorite of the guys so far, Nick is running a close second. Though his role as comic relief has been well established in the previous stories, this was the first time I’d witnessed the full scope of his thought processes, not just the fallout of his antics. And although there’s no denying that he is an absolute riot (I openly cackled more than once), the author seems to take great care in reframing his actions within his diagnosis of severe ADHD. It doesn’t make most of what he does any less funny, but it’s clear that Nick is anything but a joke.

In terms of the narration itself, I thought this was a really nice pairing. Jill Smith (a familiar voice from several other titles by this author I was fortunate to review) was a good fit for Dempsey, balancing her vulnerability and strength while letting the audience feel her surprise at her own renewed playfulness. Jeremy York was even more wonderful as Nick, and I found his interpretation of Nick’s personality to be as funny as it was thoughtful. Though I hadn’t heard him previously, I believed him when Nick was being serious just as much as I did when he was being outrageous.

Of the three audiobooks in this universe I’ve had the opportunity to hear, I think The Inside Track may be the most well-rounded. While it can certainly be filed in the “opposites attract” category, neither Dempsey nor Nick are generic in any way. Both narrators also seemed to have put a lot of themselves into their performances, and I appreciated how much that investment helped bring the characters to life. In the end, The Inside Track was a welcome surprise and a strong addition to this series, and I’m looking forward to revisiting it again very soon.

My Ratings
Story: A
Narration
Jill Smith: A-
Jeremy York: A

Love might mean coming as you are, but staying is a different matter.

Nick Fischer is a screw-up; everyone knows it and they’re not afraid to tell him so. The only thing he’s got going for him is that he plays a reliable rhythm guitar for License to Game, and his big fat bulldog, Princess Fiona, is so ugly she’s cute.

Dempsey Lawrence is a former child star turned financial advisor, and while she’s curious about the hot mess of a man who’s her co-panelist for a presentation on financial literacy, she has no intention of pursuing anything with him. Too loud, too crass, too wild, Nick is altogether too much. Plus, he’s famous, and she is so over stardom and everything that comes with it.

Except that when Dempsey gives Nick an inch, he takes a mile, and she finds that she doesn’t mind so much. Until Nick brings the pitfalls of stardom to Dempsey’s doorstep, then all the attraction in the world might not be enough to promise a happily ever after.