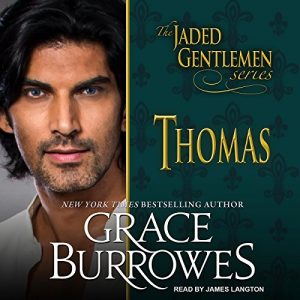 Thomas Jennings arrives at his newly acquired estate to discover his steward has been absent for two years, leaving his more than capable daughter, Loris, to fill the roll. However, with discontent among the staff, Thomas makes changes immediately, and now someone is causing mischief on his property, leaving the unprepared Thomas dependent on Loris’s knowledge and advice.

Loris Tanner enjoys her position as steward despite the hard work because she loves the land. She’s comforted to realize the new owner is reasonable and plans to keep her on in her role. However, neither Loris nor Thomas planned on the growing attraction that draws the pair together.

Even though Thomas is the first book in the Jaded Gentlemen series, it’s the second I’ve listened to. Now that I am familiar the author’s voice and storytelling, along with the narrator’s style and vocalization, it all fell into place. I adore Thomas and Loris. I love that both are unconventional for the time. She is a strong female who uses her smarts and wit. She’s happy running the land, doing a man’s job… and she’s mostly accepted, which is not something that would have happened. Likewise, Thomas is kind and generous. He values not only Loris’s opinions but the word of all his honorable employees. He gives Loris time and comfort, recognizing that she has been hurt and needs to be in charge of her own life.

The narration by Mr. Langton is comforting. His voices are soothing and familiar. While none of the characters stand out, each is just different enough that every character is unique and distinguishable from the next. While he never quite comes off as a woman, his female voices are appropriate and feminine.

Even though the story takes place only over the course of a couple months, Thomas is sweeping and almost epic in nature due to the methodical approach to both the romance and the mystery of who is behind the sabotage. I like that story gives equal footing to the romance, the mystery, and the development of the two main characters. Overall, Thomas is a delightful listen.

Thomas Jennings arrives to his newly acquired estate to find that his steward has fled under a cloud of scandal, and the property has been held together by Miss Loris Tanner, the steward’s daughter. Thomas knows what it’s like to not fit in, and he’s pragmatic enough to respect results, so he gives Loris a chance to maintain her position in a profession uniformly undertaken by men.

Thomas learns about the complexities of estate management from his unlikely tutor, despite somebody’s attempts to drive him off his own land. Mishaps turn into near tragedies, while between Thomas and Loris, respect and liking grow into attraction. Who is sabotaging Thomas’s estate, and what choices will Loris face when the malefactor has been revealed?