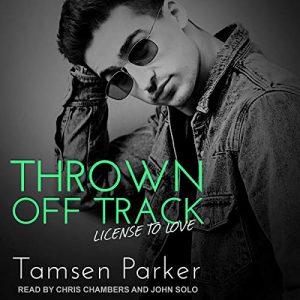 I couldn’t help but be excited to read Thrown Off Track when I found out that one of the main characters is Demisexual. As the wild child of their band, License to Game, bassist Teague Martell has had a lot of sex with partners of varying genders, but could never understand what all the fuss was about. That changes when he realizes that he’s become sexually attracted to someone for the first time—his best friend and drummer, Christian Vogel. I also liked that the author introduced such an important change for a character in his mid-twenties, at the height of his band’s popularity, and aside from some of Teague’s terminology, which bordered on juvenile on occasion (the phrase “pants feelings” is repeated several times), I think Teague’s new awareness was treated well.

Having briefly met Teague and Christian before, I was happy they got their own story in Thrown Off Track. Of the two, I found it a little more difficult to get a handle on Teague’s POV, even though I feel the author approached his uncertainty about his sexuality with open-mindedness and respect. Teague almost seemed to be entirely different people at times, depending on whether he was in “business mode,” acting like the party boy everyone expects him to be, or turning into the playfully insecure man-child who reaches out to Christian for physical affection and love. Eventually, however, these occasionally contradictory aspects coalesced into someone it was easy to care for.

As much as I liked both characters, I have to admit that it was Christian who won me over from the start. I love that he’s a drummer, that he’s introverted, and that he’s as flawed and scared and hopeful as just about anyone whose world is on the brink of a significant shift might be. His acceptance of (and eager participation in) Teague’s self-exploration was as generous as it was rewarding, and rendered the knowledge that some kind of badness was inevitably waiting in the wings heavier. While his pain was sharper when it did arrive, it also made the ending even sweeter.

As to the audiobook itself, I feel that the narrators portrayed their respective characters well, although I have a definite preference for John Solo’s part as Christian. Thrown Off Track contains lengthy stretches of dialog, and it was these moments when each narrator had to read in both characters’ voices that made the biggest difference for me. I think Chris Chambers handled most of the shifts in Teague’s personality well, but I never did fully warm to his portrayal of Christian. Alternatively, John Solo was more consistent throughout as Christian, as well as making Teague’s voice as distinct, yet relatable, as possible.

In the end, I was glad to have had the chance to review Thrown Off Track by Tamsen Parker. Although it’s the beginning of an entirely different series, this story chronologically follows immediately after Love on the Tracks (Snow & Ice Games, Book 1). Not having listened to either before now, this order made the stories flow seamlessly from one to the next for me, but might be confusing for anyone who hasn’t read the earlier books. While Teague’s journey is only one out of infinite possibilities, I think the author has created an interesting and enjoyable HEA, and I’m looking forward to finding out what’s in store for Christian and Teague, as well as the rest of the band, in the future.

My Ratings
Story: B+
Narration:
John Solo: A-
Chris Chambers: B+

Singing about love is one thing. Finding it is another.

Teague Martell has been License to Game’s bassist for over a decade, and he’s played Casanova for just as long, sleeping with almost everyone in his path. But unbeknownst to even his bandmates, it’s always felt like going through the motions.

His best friend and LtG drummer Christian Vogel has secrets of his own. Like that he’s had a crush on Teague for as long as he’s had crushes. And while LtG’s lead singer may have made his solo plans public and sent the band into a tailspin, Christian’s got a side gig as well – one he’s been keeping under wraps.

A nude photoshoot for a charity calendar has Teague seeing Christian in a different light – suddenly he knows what it is to want. But disagreements about the future of the band could impact their future as a couple. Christian and Teague have to decide whether their differences of opinion create a sweet harmony or if there’s too much discord in the duet they’re finally playing.

Reviews in the Series:
Love on the Tracks by Tamsen Parker (Snow and Ice Games #1) – Audiobook Review