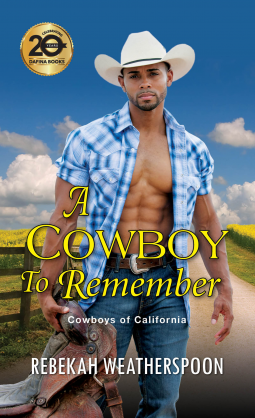 Living in New York City, Evie is a television cooking star on her way up in the world. But the evening of the show’s Christmas party, Evie suffers a terrible accident and wakes with no memory. Desperate to help her, Evie’s friends reach out to her “in case of death” contact to see if he can assist in the recovery.

Once close friends, Zach and Evie haven’t talked in ten years. But when his brother Jesse receives a call that Evie is injured and needs help, he and Jesse jump on the redeye from California to be by her side. Although she doesn’t remember the Pleasant brothers, she recognizes they care for her, and she goes to California to their ranch and resort for some R and R, where she reconnects with so many folks from her youth.

A Cowboy to Remember is a slow-burn, second chance romance with the added twist of memory loss. While I’m not usually a fan of amnesia-romances, Ms. Weatherspoon successfully uses the trope to give Evie a fresh look on her crazy life. While recovering, Evie rediscovers her passion for cooking and realizes that she may not have enjoyed the life she was living in NYC. The secondary characters add a lot of value to the story. I love both the NY friends as well as the family and friends in California and hope we continue to see them in the upcoming titles.

The pace of the story is lovely; like a meandering cowboy riding into the sunset. It’s perfect for Evie and Zach’s budding, and rekindling of sorts, romance. They are a “second chance” romance, but with her memory loss, it’s also a new romance. Evie and Zach experience dynamic chemistry and passion, which has the potential to combust depending on what happens once she regains her memories. I appreciate how up front Zach is about his past mistakes, even though Evie doesn’t remember the fight that drove them apart. I also love the Evie is on her own timeline – and if she wants to kiss Zach, she will. She won’t be told what to do. I love her drive to relearn to cook and get used to doing it in front of others.

Overall, A Cowboy to Remember is a delightful slow-burn romance, kicking off what promises to be a wonderful new series from Ms. Weatherspoon.

With a headline spot on a hit morning show and truly mouth-watering culinary skills, chef Evie Buchanan is perched on the edge of stardom. But at an industry party, a fall lands Evie in the hospital—with no memory of who she is. Scrambling to help, Evie’s assistant contacts the only “family” Evie has left, close friends who run the luxury dude ranch in California where Evie grew up. Evie has no recollection of them—until former rodeo champion Zach Pleasant walks into her hospital room, and she realizes his handsome face has been haunting her dreams . . .

Zach hasn’t seen Evie in years—not since their families conducted a campaign to make sure their childhood friendship never turned into anything more. When the young cowboy refused to admit the feelings between them were real, Evie left California, making it clear she never wanted to see Zach again. Now he refuses to make the same mistake twice. Starting fresh is a risk when they have a history she can’t recall, but Zach can’t bear to let go of her now. Can he awaken the sleeping beauty inside her who might still love him?