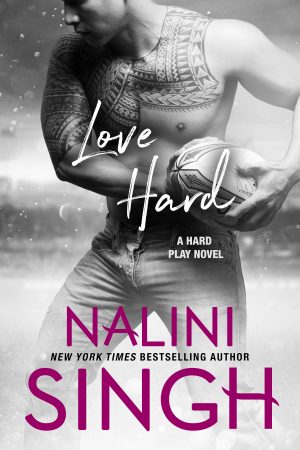 Love Hard is another enjoyable, entertaining contemporary romance from one of my favorite authors. I love getting back to the Esera-Bishop clan and that story opens with the wedding of Gabe and Charlotte, bringing back several past characters, including the pair that kicked off the Rock Kiss / Hard Play series, Molly and Fox. It is a great “reintroduction” to the clan and series after the previous book was about a couple outside the family.

Juliet, aka Jules, and Jacob, aka Jake, went to school together. Jules was the “bad girl” best friend to Callie, Jake’s girlfriend, and while not exactly friends, they both loved Callie dearly. Juliet moved away when they were still in high school, and not too long after, Callie and Jake had a baby girl, Esme. Callie died shortly after giving birth, and Jake has raised his daughter (with the help of his family) for the past six years. Present day, Jules and Jake are matched together at Gabe and Charlotte’s wedding. Jules, having gone through a short but very public marriage to a media-hog sports figure, moved back home and has lived a quiet, low-key life, befriending Charlotte, who had no clue about the history between Juliet and Jake.

Jules and Jake have a fairly smooth journey to HEA, and sometimes that is just what I need. Yes, they have hesitations, but the drama is external to the couple rather than within. Jake is a kind soul who loves with all his heart and fiercely protects those he claims as his. This includes Juliet, who has never experienced this kind of unconditional love. She grew up without her parents and raised by an uncaring aunt. Only her best friend gave her that love, and she lost her early. Yet, she’s not messed up. She’s made several mistakes in her youth, but grew into a strong, confident woman. She works hard and has earned her success.

Jake had issues after losing his high school sweetheart, the mother of his daughter, so young. He understands this and went through counseling – so it’s “in the past,” and he is able to recognize and deal with his issues. He’s healthy and in a good place for a real relationship. For both – knowing they had issues, but have moved passed the issues, is what makes the romance move forward with ease. They consciously open themselves up to trust and love, and stick together through the bumps.

If you are looking for a sweet and insanely sexy romance, look no further than Love Hard!

Jacob Esera, star rugby player and young single father, has worked hard to create a joyous life for his six-year-old daughter. After the death of his childhood sweetheart soon after their daughter’s birth, all Jake wants is safety and stability. No risks. No wild chances. And especially no Juliet Nelisi, former classmate, scandal magnet, and a woman who is a thorn in his side.

As a lonely teenager, Juliet embraced her bad-girl reputation as a shield against loneliness and rejection. Years later, having kicked a cheating sports-star ex to the curb, she has a prestigious job and loyal friends—and wants nothing to do with sportsmen. The last thing she expects is the fire that ignites between her and the stuffed-shirt golden boy who once loved her best friend.