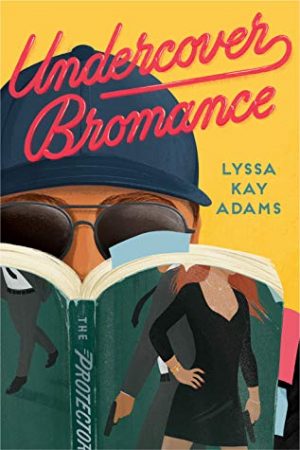 Adams knocked it out of the park again. Undercover Bromance is the second book in the Bromance Book Club and this time around we get the story of the founder of the book club, Mack and the sister to the heroine in the previous book, Liv.

When Liv and Mack met she didn’t like him because he ate her leftover Chinese food. The next time they see each other it’s when he is on a date with another woman in the restaurant she works as the pastry chef. That night didn’t end well for either of them. Mack was dumped (for the first time) and Liv walked in on her boss sexually harassing another employee and was fired.

Undercover Bromance focuses on the plot of Liv trying to bring down her boss for his sexual harassment. Mack and Liv work together along with others to bring Royce’s (the sleazeball celebrity chef) actions to light.

“But under the chicken? Like where the vagina is?”

There’s more to the conversation explaining the chicken anatomy. I would have never thought I would learn so much about chicken’s vaginas or the lack of them while reading a romance.

Mack and Liv’s story is a classic case of enemies to lovers with a big secret as the fork in the road to their HEA. Their story was full of laughs, touching moments and smoking chemistry.  I’m looking forward to the next novel in the Bromance Book Club, Crazy Stupid Bromance which features Noah the hacker we met this time around and Liv’s friend Alexis.

Braden Mack thinks reading romance novels makes him an expert in love, but he’ll soon discover that real life is better than fiction.

Liv Papandreas has a dream job as a sous chef at Nashville’s hottest restaurant. Too bad the celebrity chef owner is less than charming behind kitchen doors. After she catches him harassing a young hostess, she confronts him and gets fired. Liv vows revenge, but she’ll need assistance to take on the powerful chef.

Unfortunately, that means turning to Braden Mack. When Liv’s blackballed from the restaurant scene, the charismatic nightclub entrepreneur offers to help expose her ex-boss, but she is suspicious of his motives. He’ll need to call in reinforcements: the Bromance Book Club.

Inspired by the romantic suspense novel they’re reading, the book club assists Liv in setting up a sting operation to take down the chef. But they’re just as eager to help Mack figure out the way to Liv’s heart… even though she’s determined to squelch the sparks between them before she gets burned.