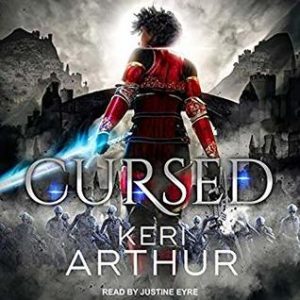 Cursed is the second book in Keri Arthur’s Kingdoms of Earth & Air fantasy series; however, the other than taking place in the same world has the first book, it is a standalone story with no real ties to Unlit. We are introduced to Nyx, the princess and rightful heir of Cannamore. But since a female has never ruled the kingdom, her tyrannical father and sadistic brother have hidden the truth, keeping Nyx as a slave, used by the courtesans and tortured if she tries to speak the truth.

Lord Donnall, realizes Nyx is the one the Wind whispers of, the one who will help win the coming war, so when she is tossed in his prison cell, he makes a bargain to take her off the king’s hands and away from the kingdom. Together, the pair learn of a new threat to the kingdom, honing their skills to try and defeat an unknown foe with unlimited magic.

Overall, I enjoyed Cursed and the world of earth and air magic. One of my favorite aspects is how the magic works: when those with ability pass on, their soul/spirit joins a collective and assists those still living. This wasn’t featured as much as in the first book but still an important factor in Nyx learning how to use and control Earth and how to defeat their new enemy.

Ms. Arthur basically creates another new world in Cursed, and I wish that either there was a stronger connection and more ties to the first book, or if there were some, the author pointed them out more clearly. Yet, I still enjoyed the depth and intricacy of Cannomore, the surrounding lands, and the deadly new foe who is actually an ancient enemy. The characters, most especially Nyx and Donnall, were well developed, and I enjoyed their slow-burn romance as each learned to trust one another.

Narration: Cursed is shared from the first person POV of Nyx. Ms. Eyre has a distinct voice that is soft yet gruff and grizzled around the edges which is perfect for Nyx, who has lived a very hard life. Ms. Eyre’s males are noticeably deeper and masculine. She gives Donnall a delightful and sexy Scottish brogue that distinguishes him from other males. She employs a fitting stern voice with an edge of urgency for both the Wind and Earth spirits.

In the end, I enjoyed Cursed and hope the author gives us more tales from this very interesting world.

Whomsoever draws the sword from the ancient seat of this land shall rule it, and they shall bring peace and prosperity to its people.

For nearly a thousand years, the first-born son of every Cannamore King has drawn the sword, and the land and her people have indeed prospered.

Princess Nyx Bel-Hannon is neither male nor first-born, but it is her hand that draws the sword rather than her twin brother’s. As a reward, she is given a prison rather than a throne.

But a deep darkness now spreads across the Kingdom, and her borders are threatened by creatures capable of magic powerful enough to destroy mountains or split the land asunder. Without the true heir to wield the sword, Cannamore risks annihilation. The King and crown prince want nothing more than to be permanently rid of Nyx, but cannot afford her blood on their hands. Instead, they give her to a highland warlord in the hope he will do what they dare not.

Nyx has no intention of letting the highlander get in the way of her thirst for revenge or the need to reclaim her throne. But it’s a quest that may well destroy the kingdom she loves.

Because Nyx has been cursed by the god of war. It is her destiny to save Cannamore.

Or utterly destroy it.