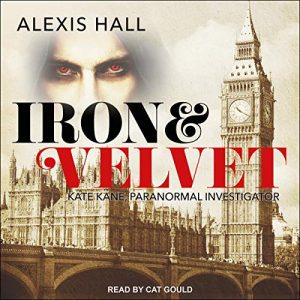 I have to admit that I was as nervous as I was excited about listening to Iron & Velvet being read aloud by someone not in my own head for the first time. I’ve loved every Kate Kane story I’ve had the privilege of reading, and I’m very attached to the characters at this point, so the idea of hearing another’s interpretation of those voices was a little intimidating. After all, with audiobooks, it seems that what’s heard cannot (often) be unheard.

As London’s only “honest-to-God faery princess” paranormal private investigator, Kate Kane has seen her share of the mysterious, unbelievable, and downright bizarre goings on around town. Given the variety of otherness at work all over the city, there ought to be a steady demand for her particular brand of sleuthing, but these days Kate seems to keep more frequent company with her liquor stash than anything else. At least, until a celibate incubus shows up to retain her services on behalf of the Prince of Cups herself.

From there, Iron & Velvet careens about like an inebriated June bug, with Kate bouncing off of each instance of elucidation before twitching around for a little while, then zipping right back into action and certain—or, at least likely—death. In between, though, she ponders what-ifs, regrets what-has-beens, and misses those who’ve held a bit of her heart. This, as well as everything else I wouldn’t dream of dissecting here, rate the Kate Kane series among my favorite pieces of storytelling.

Despite my reservations, I did like the audiobook very much. Cat Gould turned out to be a good fit for Kate, making me believe almost every painful instance of Kate’s desire to be anywhere other than where she was. There were a couple of small places that pulled me back out of the story briefly, but, for the most part, I could hear the personalities extremely well. Still, the moments I liked best were Ms. Gould’s interpretation of Kate’s acceptance and/or resignation after working through some variation of: “things can’t be any worse”—“no wait, I was wrong about that”—“what the…IS that thing”—“oh well, here we go”—all of which I enjoyed tremendously.

On the whole, I was really happy with the audiobook edition of Iron & Velvet. I hope that existing fans of the series will find this narration to be a good fit for Kate’s world, and that many who have been undecided might be drawn in by Cat Gould’s performance. As an aside, I’d like to combine both print and audio as soon as I can just because I think it would be an even more rewarding experience. Either way, I’m glad I was able to give this version a chance, and I’m very much looking forward to seeing Kate again, still lovely and whiskey-roughened, in the next book.

My Ratings
Story: A
Narration: B+

Last year I broke all of them.

The only rule I didn’t break was the one that said don’t work for vampires. But then a dead werewolf showed up outside the Soho shag palace of Julian Saint-Germain – a bloodsucking flibbertigibbet who’s spent the last eight centuries presiding over an ever-growing empire of booze, sex, and hemoglobin.

I shouldn’t have taken the job. The last thing I needed was to get caught in a supernatural smackdown between a werewolf pack and a vampire prince. Even if the vampire prince was dangerously my type. But what can I say? I was broke, I’m a sucker for a pretty face and I gave up on making good decisions a long time ago.