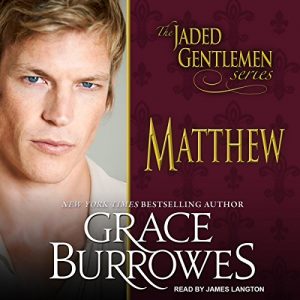 Picking up shortly after the conclusion of Thomas, Matthew opens with Thomas’s sister Theresa and her daughter Pricilla taking care of his estate while Thomas is away on his honeymoon travels. Running into difficulties with a mare, Theresa calls on Thomas’s neighbor, Matthew. Both Theresa and Matthew are lonely soles (she spending 8 years in self-inflicted exile, he the widower magistrate with bothersome in-laws), and the pair strike an early friendship.

Following the mold of the preceding book, Matthew tells the tale of an unconventional woman who defies the times and a jaded gentleman who discovers a new joy in life with the help of the right woman. I like Theresa a lot. I like that despite the hardship of her past and the unkindness of her brother, her only living relative, she remains kind-hearted and gentle. Matthew is a true gentleman who recognizes the wrongs places upon Theresa, and defends her every action to both her brother and to Theresa. Through his love, she learns to accept her own faults and appreciate the person she’s become.

The only real negative I had was with Priscilla, who is mostly lovely and an excellent supporting character. However, the author shares a few sections from her point of view, and she is entirely too astute for an eight-year-old. Although her observations are spot on, I just didn’t like that they came from an eight-year-old.

Once again, Mr. Langton provides the narration for the tale. His voices, expressions, and characterizations have become familiar and enjoyable. His cadence is well-suited for the slower-paced and historically-set romance.

Even though Matthew is the second book in the Jaded Gentlemen series, it’s the third title I’ve listened to, and I continue to enjoy the titles. The book was delightful and lovely. I like that Theresa and Matthew find love early on, and it’s solving the mystery that delays the HEA.

Theresa Jennings strayed from the path of propriety as a younger woman, though now she’ll do anything to secure her child’s eventual acceptance on the fringes of polite society. Theresa will even make peace with the titled brother who turned his back on her when she needed him most. Matthew Belmont is a widower who’s been lonely too long. He sees Theresa as a woman paying far too high a price for mistakes long past, and as a lady given too little credit for turning her life around. Theresa is enthralled by Matthew’s combination of honorable intentions and honest passion, but then trouble comes calling, and it’s clear somebody wants to ruin any chance Theresa and Matthew have for a happily ever after.