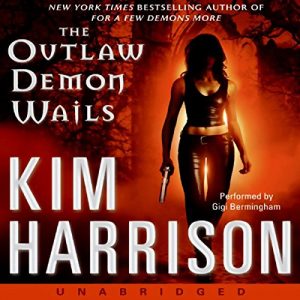 Now that I’m in the middle of the series my reviews will be a fast break down of my thoughts unless I have a book I really want to talk about.

UGH, I’m sure Gigi Bermingham is a fine narrator but when you have an awesome narrator already established in a long-running series it’s hard to like a one-timer.  I’m not sure why they went with a different narrator for one book, maybe Gavin’s schedule didn’t allow time for the release date.

Everything! More Al! More Trent (who I’m starting to like). More action than we’ve seen in previous books. We get to see the ever-after.

My Ratings:
Story: A-
Narrator: C

To save the lives of her friends, Rachel did the unthinkable: she willingly trafficked in forbidden demon magic. And now her sins are coming home to haunt her.

As Rachel searches for the truth behind a terrifying murder, an even greater menace threatens, for the demon Algaliarept will stop at nothing to claim her, and the discovery of a shocking family secret throws Rachel’s entire life into question. If she is ever to live free, Rachel must first walk willingly into the demonic ever-after in search of long-lost ancient knowledge.

But when you dance with demons, you lay your soul on the line…and there are some lines that should never be crossed. 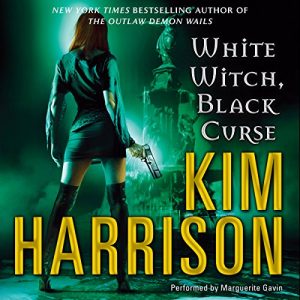 ** spoiler alert ** In case you have not noticed this is the 7th book in the series. So there WILL BE series SPOILER below.

If it wasn’t for the last quarter of the book it would have gotten a C- rating.

“…Everyone had to eat, but eating people wasn’t polite.”

I’m so glad that Marguerite Gavin is back as the narrator!!! She is Rachel Morgan. NO ONE can replace her.

What I liked: (SPOILER ahead)

That last part of the book really brought it around for me. After reading For a Few More Demons, I was not blown away by Kisten’s death. But after Rachel relives that night on his boat I got it. It was very sad and sweet at the same time. I never really got Kisten as a character but after finding out he did what he did to save Rachel and Ivy I wish we got a little more time with him. Those last few chapters dealing with the returned memory and how the book ended was the best part.

Seven books in and I’m still not an Ivy fan. I’m sick of the push and pull of her and Rachel’s relationship. I just want her to either become undead already or for one of them to move out.

Not enough Al and Trent.

I’m in the middle of it so yeah. Unless the series take a crappy turn I’m sticking with it to the end. In fact I can’t wait to check out the next audiobook, Black Magic Sanction from the library.

Some wounds take time to heal…and some scars never fade.

Rachel Morgan, kick-ass witch and bounty hunter, has taken her fair share of hits, and has broken lines she swore she would never cross. But when her lover was murdered, it left a deeper wound than Rachel ever imagined, and now she won’t rest until his death is solved…and avenged. Whatever the cost.

Yet the road to hell is paved with good intentions, and when a new predator moves to the apex of the Inderland food chain, Rachel’s past comes back to haunt her. 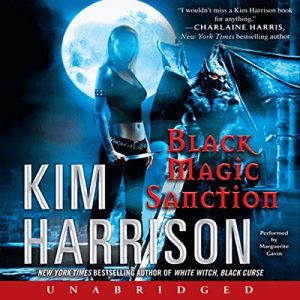 Black Magic Sanction was much better than the last book, White Witch, Black Curse and is my favorite book to date.

“Could you be of the mind to let me go?”

“Sorry.” I said dropping my hands from his shoulders.

I flushed red. “I’m working on that,” I said embrassed. But it was kind of nice doing the nasty with a witch. Where I didn’t have to explain myself. Biology was grand. Male witches were not as well endowed as humans and to make up for it we girls had a couple of extra muscles that didn’t let go right away. I didn’t have control over it, actually. And the saying was that the better the sex, the longer it took. Right now it seemed like it might be a while.

Marguerite Gavin is Rachel Morgan. NO ONE can replace her. I’ve enjoyed Gavin’s narration so much I’m going to try some of her other narration work.

Kim Harrison made me cry, I’m not heartless after all.

Kim Harrison made me cry. Yes this is in “What I liked”, but I was sad over the reason I cried. SNIFF

Already have Pale Demon downloaded from the library.

Rachel Morgan has fought and hunted vampires, werewolves, banshees, demons, and other supernatural dangers as both witch and bounty hunter—and lived to tell the tale. But she’s never faced off against her own kind . . . until now.

Denounced and shunned for dealing with demons and black magic, her best hope is life imprisonment—at worst, a forced lobotomy and genetic slavery. Only her enemies are strong enough to help her win her freedom, but trust comes hard when it hinges on the unscrupulous tycoon Trent Kalamack, the demon Algaliarept, and an ex-boyfriend turned thief.

It takes a witch to catch a witch, but survival bears a heavy price.