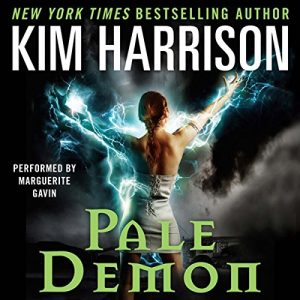 “The car was full of unhappy people heading west. It was the Great American Family Road Trip, all right. Whaaa-hoo!”

Demons are people too…

I like seeing another side of the demons. I’ve really grown to like Al. And honestly, I see him more of a love interest than any of the guys currently in Rachel’s life.

I know something happens in the future with Rachel and Trent thanks to all the snippets I’ve seen around the book world. But he needs to grow a pair in order for me to like him. He lets women fight for his life. He needs to get a little more alpha or he has no hope to hold on to Rachel. She needs someone strong.

Marguerite Gavin is Rachel Morgan. NO ONE can replace her. I did have one issue with the narration this time around. Gavin’s voice for Pierce kept switching to an Irish accent when he didn’t have it in the last book. And she didn’t stick with the accent every time he spoke. I don’t know if she forgot how she did his voice before or if there was a different director. Sure that sounds like a minor thing but it bugged me.

I downloaded A Perfect Blood from the library once I hit the 50% mark of Pale Demon.

Condemned and shunned for black magic, Rachel Morgan has three days to get to the annual witches’ conference and clear her name, or be trapped in the demonic ever-after . . . forever after.

But a witch, an elf, a living vampire, and a pixy in one car going across the country? Talk about a recipe for certain disaster, even without being the targets for assassination.

For after centuries of torment, a fearsome demon walks in the sunlight—freed at last to slay the innocent and devour their souls. But his ultimate goal is Rachel Morgan, and in the fight for survival that follows, even embracing her own demonic nature may not be enough to save her. 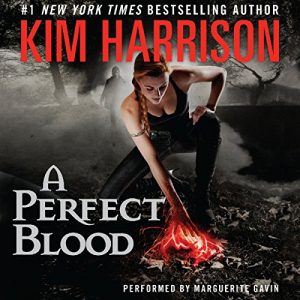 If you’ve not read Pale Demon you may not want to read this review since I talk a little about some of the events at the end of the book.

So I checked the audiobook out from the library but after finding out there’s a bonus chapter from Trent’s POV I grabbed the ebook so I could read it. And oh boy it was the best part of the book!!

He froze as the scent of her hair met him. It was touching his cheek, tickling him.
I can’t afford this, he thought, but he didn’t move, watching her finger trace the new line.

That’s just a bit of Trent’s thoughts on Rachel. I do believe the cookie maker (he’s an elf) has it bad for our itchy witch. Seriously if you haven’t read the bonus chapter you NEED to find a copy of it and read it! I’m totally on Trent’s side now where before I wasn’t that sure about him.

I’ve only listened to the books in the series and I wondered if I would enjoy it if I read them. I got my answer with A Perfect Blood. The audiobook expired from my library account before I could finish the last four chapters so I had to read them. It took me way too long to read them. I missed Marguerite Gavin’s voice in my head bring Rachel, Jenks, Al and the others to life.

I like that we got a little break from the drama that has been going on in Rachel’s life. A Perfect Blood is a detour in the series story arc of sorts where Rachel is working a case with the FIB. Which is parallel to the break she has taken from the whole being a demon thing. After Trent gave her the bracelet in Pale Demon that hides her from the demons and cuts off her ley line magic she’s been a plain earth witch for the last 6 months.

And both Rachel and Trent are having a hard time being around each other after that kiss they shared at the end of Pale Demon. Rachel won’t take his calls, and when they are face to face, they don’t know where to look or how to talk to each other. And that bonus chapter…. Trent thought twice that he was falling in love with Rachel. I can’t wait to see how this unfolds. And could it be that Trent and Al are jealous of each other where Rachel is concerned? That bonus chapter of Trent’s POV was a real eye-opener on his character. I didn’t really like him that much but now I’m in love!!

Overall I enjoyed A Perfect Blood and I can’t wait to see how the series changes after this point.

“Welcome back, my itchy witch.”

“I didn’t mean now,” he protested. “I’m not going to raise the child. I’m having enough trouble with Rachel.”

Ritually murdered corpses are appearing across Cincinnati, terrifying amalgams of human and other. Pulled in to help investigate by the I.S. and FIB, former witch turned day-walking demon Rachel Morgan soon realizes a horrifying truth: a human hate group is trying to create its own demons to destroy all Inderlanders, and to do so, it needs her blood.

She’s faced vampires, witches, werewolves, demons, and more, but humanity itself might be her toughest challenge yet.

Audiobook Review: Ever After 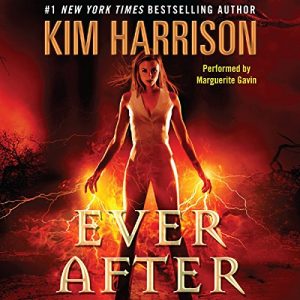 Ever After is currently my favorite book in The Hollows series. We get a lot of Trent and Al and very little Ivy which was the best part for me. LOL

With Ever After Rachel has to deal with some issues that happened in Pale Demon and A Perfect Blood. As far as Pale Demon, Rachel has to work her magic to save the ever after because of the ley line she made while she was over there. And try to find a way to take down Ku’Sox (or as Jenks calls him, Cut Socks). So you have plenty of demon hijinks going on, which is always fun.

Then you have to moment that Trent and Rachel shared in A Perfect Blood and Rachel is dealing with personal issues as well. Oh boy is there some personal stuff going on with this one. But I can’t talk about it without spoiling but just know it’s good and can only get better (I hope).

The main focus is saving the ever after and stopping Ku’Sox. Rachel gets help from old friends and new ones. New as in gargoyles, I love these creatures. Kim Harrison is a great writer that I have a clear picture in my head what all of her characters look like and I want a gargoyle on my roof.

Harrison is slowly weaving what will end up being a great ending to the series I can just feel it. She makes sure to keep past issues clear and present with each book. We are slowly getting more answers to old questions while she hooks us with new problems. The issue with the Rosewood Syndrome is back in full force when a group of babies goes missing. Another thing I love about Harrison is that she’s not afraid to let characters die. I just wish the next character to go would be Ivy. I’ve not liked her from the beginning and just when I thought we would get an Ivy free book she pops up for a couple of chapters. The Hollows is the only series where I don’t like the vampire race. I hate their politics and their very way of life.

I love that Rachel Morgan is a character that has grown during the series. She’s had some really TSTL (too stupid to live) moments in earlier books but she’s realizing that she has made of some the same mistakes over and over in the past and is working to correct that behavior.

Marguerite Gavin continues to rock this series! She will forever be Rachel Morgan to me. I’m off to listen to The Undead Pool.

The ever after, the demonic realm that parallels the human world, is shrinking. If it disappears completely, so does all magic. It’s up to witch-turned-daywalking-demon Rachel Morgan to avert catastrophe and keep life from changing… for the worse.

While saving the world is important, it isn’t Rachel’s only motivation. There’s also the small fact that she caused the ley line to rip in the first place, setting off a chain reaction of unfortunate events. That little mistake has made her life forfeit unless she can fix it. It’s also made her more than a few enemies, including the most powerful demon in the ever after—a terrifying entity who eats souls and now has an insatiable appetite for her. He’s already kidnapped her friend and goddaughter to lure her out, and if Rachel doesn’t give herself up soon, they’ll die.

But Rachel has more than a few impressive and frightening skills of her own, and she isn’t going to hand over her soul and her life without one hell of a fight. She’s also got a surprise: elven tycoon Trent Kalamack. With this unlikely ally beside her—a prospect both thrilling and unnerving—she’s going to return to the ever after, kick some demon butt, rescue her loved ones… and prevent an apocalypse before it’s too late. Or, at least that’s the plan…