Audiobook review: To Kill a Fae by C.S. Wilde 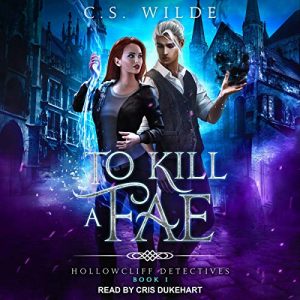 To Kill a Fae is the first book in the Hollowcliff Detectives series. The series takes place in a alternate world were the different factions of supernaturals and humans live in a tentative peace. Tagrad is divided into sectors, each controlled by one of the different groups. When the Summer King (fae) is found dead alongside his human lover, human sector detective Mira is partnered with fae detective Sebastian (Bast). As the pair digs around for clues to the high profile murder, they begin to under corruption, which puts their lives in danger.

Mira holds a secret that only her captain/foster mother knows: she’s actually one of the banished water fae. Somehow, Mira is able to live on land, but she must hide the truth from everyone, including her best friend. However, once Mira partners with Bast and their lives are in danger, she calls on her abilities to save them. Mira is constantly wondering if Bast realizes she’s not human. We learn much about Mira via extended flashbacks to her life in the sea.

Bast and Mira share an instant attraction that plays out over the course of the book. But it’s not the primary focus of the story. Reading like an urban fantasy, the tale focuses on the mystery of who murdered the Summer King and why. We learn about the different factions and the larger world via Mira’s point-of-view and in bits and pieces.

To Kill a Fae is a decent start to what could be an entertaining series. I like the concept of a tentative peace with all kinds of supernaturals and humans. I also find the idea of a banish mer-folk different and exciting. The world building is solid, with the character development slightly less so. We get a lot of backstory on Mira, learning about the water fae. I like the mysterious overarching story of Mira’s roots and the puzzling Poseidon. The mystery within the book was okay. How the pair discovers who killed the Summer King and the motives for doing so were a bit weak. The romantic element of the story is good; however, I do wish we could have some of Bast’s POV to find out how he feels about Mira.

Narration:  The story is shared via the third person POV of Mira. The narrator, who is Mira, is appropriately feminine; strong with the sexy undertones of her siren. Ms. Dukehart also does a good job of separating dual natures of Mira: the wannabe human and siren. The narrator changes tone and voice for dialogue, making it appropriately deeper for males. I didn’t notice a huge difference between characters of the same gender, but enough for distinction and to keep it interesting. The narrator keeps the story moving forward in a lively manner.

Overall, I enjoyed this first story in the Hollowcliff Detectives series, and I look forward to finding out what happens next for Mira and Bast.

In detective Mera Maurea’s experience, three things motivate a murder: secrets, convenience, or passion. But none of the three can explain why the Summer King is dead.

With a tight deadline hanging over her head, Mera has to figure out who’s the culprit before the frail balance that holds the nation of Tagrad together crumbles into dust.

To aid her – or turn her life into a living hell, hard to tell which – is her fae partner Sebastian Dhay, a snarky detective with a penchant for the illegal. He’s a volatile wild card who will do anything to solve the murder, even if it means his doom.

The clock is ticking. And Mera is hiding a deadly secret of her own.