Audiobook review: A Bad Day for Sunshine by Darynda Jones 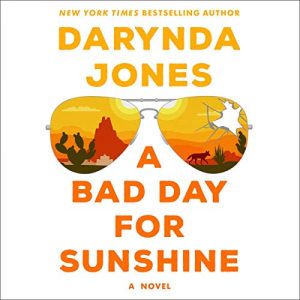 Sunshine Vicram is a strong woman who has a few skeletons in her closet. Unfortunately, we can’t really talk about them without giving spoilers. Sun married young, left Del Sol, then lost her husband before her daughter was born. Now she’s returned to Del Sol with her teenage daughter, Aurie, as the newly elected sheriff. She’s trying to find a missing girl and chasing down a kidnapped prize rooster all while learning the ropes and avoiding her life-long crush, Levi Ravinder. It’s only Sunshine’s first day, and the crazy just gets weirder and weirder.

Jennifer and Jen have a special joint review today!

Jen:  A Bad Day for Sunshine is one of the best books I’ve read this year. I am not normally a suspense reader, but this book is a winner. It’s more humor and mystery than suspense. And I absolutely LOVED Sunshine and Aurie. The relationship Sun has with her daughter is special. Think Lorelei and Rory (of the Gilmore Girls). They share inside jokes that no one else would understand. Their back and forth banter is hilarious, but also touching at times. They have strong emotions and a deep love. Each has her secrets, yet they are loving and when the secrets finally get shared… so much emotion. Both have their own stories to tell and experiences to relate, and I appreciate that the author gives us the story from both Sun and Aurie’s POVS.

Jennifer: I agree A Bad Day for Sunshine was more mystery with comedy mixed in. That saying, “you can’t go back home,” is something Sunshine fights throughout the plot. But it is more that the town she left is the home she can’t go back to because there are secrets surrounding why she left (again spoilers). Because the POV switches between Sun and Aurie I felt like I was reading a contemporary fiction one chapter and a young adult fiction in another chapter. Not a bad thing necessarily. Sun is dealing with adult issues while Aurie is dealing with kid issues at school but they soon deal with the same adult issues because some of the elements in the overall plot are connected.

Jen mentioned she thought the mother and daughter duo were similar to that of the duo in the Gilmore Girls, and I can see that. But because the writing is very similar to that in the Charley Davidson series, I saw them as Cookie and Amber.

Jen: Agreed – even the narration (below) reminded me of Cookie and Amber.

Similarly, Sun shares an incredible bond with her parents and her best friend, Quincey. In fact, Ms. Jones creates a town filled with quirky yet charming characters that I grew to love (well there are a couple I do HATE!). Some are more fleshed out than others, but I want to know more about every single one. And oh, that Levi… he and Sun really need to get their act together. The bonds and jokes help the book flow, especially during the darker moments – and there are several of those. While the story shares lots of humorous moments, it deals with darker topics. A teen girl has been abducted. Sunshine has a very shaded past that the reader learns about over the course of the book, and how we come to learn about it is heart-wrenching. Ms. Jones puts together a smart mystery with several moving pieces that come together over time.

Jennifer: Yes Jones does a great job adding in light with the dark. There’s abusive families members and other things that might be triggers for some readers, but Jones balances it with some levity to soften the horrible elements between family members and others.

I agree there are some amazing secondary characters, and I have high hopes we will get to know them better as the series continues. While I wouldn’t call the ending a cliffhanger, we are left wondering about Sun’s past and how one character may or may not have been involved.

Jen: Lorelei King is my absolute favorite narrator. The story is shared via the alternating third person POVs of both Sunshine and Aurie. The narrator remains the same female voice for both POVs and changes with dialogue. I will say at first it was hard not to hear some of the Charley Davidson characters in the narration. However, once I was lost in the story, I never thought of Charley again. Ms. King creates a cast of dozens, with every character having a unique voice. She helps me submerse my mind into the story, and I’m not distracted by the outside world. Her males are deeper, and Levi is sexy and rough. Her females range from average to deep timbre. She does younger (teen) amazingly! Aurie sounds just like a teenage girl: younger, fresh, but not false. There is even a boy with a cracking teenage voice – again, it sounds real and not fabricated.

Jennifer: I agree the narration was spectacular as only King can do, but in the same vein it was hard to not think of Charley Davidson and her group of friends while listening. I think that’s because I listened to that series before A Bad Day for Sunshine and the writing is very familiar to me. That’s the downfall of other authors who use the same narrator for all their novels. I usually try not to listen to their novels from different series too closely and since I recently listened to the last Charley book I think this caused the issue with my ears. LOL

In the end, A Bad Day for Sunshine is a wonderful story that is sticking with us long after we’ve finished listening. The charters are special and their story is far from over. There are so many questions (and theories) left to be explored, and we cannot wait to visit Del Sol again.

Our Ratings
Story: B+
Narration: A

Sheriff Sunshine Vicram finds her cup o’ joe more than half full when the small village of Del Sol, New Mexico, becomes the center of national attention for a kidnapper on the loose.

Del Sol, New Mexico is known for three things: its fry-an-egg-on-the-cement summers, its strong cups of coffee—and a nationwide manhunt? Del Sol native Sunshine Vicram has returned to town as the elected sheriff–an election her adorably meddlesome parents entered her in–and she expects her biggest crime wave to involve an elderly flasher named Doug. But a teenage girl is missing, a kidnapper is on the loose, and all of it’s reminding Sunny why she left Del Sol in the first place. Add to that trouble at her daughter’s new school and a kidnapped prized rooster named Puff Daddy, and Sunshine has her hands full.

Enter sexy almost-old-flame Levi Ravinder and a hunky US Marshall, both elevens on a scale of one to blazing inferno, and the normally savvy sheriff is quickly in over her head. Now it’s up to Sunshine to juggle a few good hunky men, a not-so-nice kidnapping miscreant, and Doug the ever-pesky flasher. And they said coming home would be drama-free.