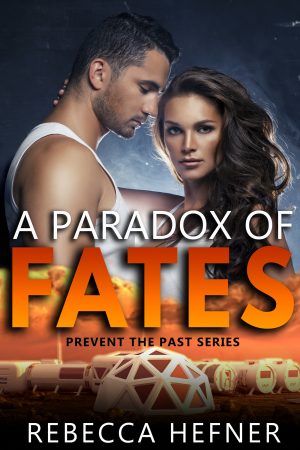 A Paradox of Fates is a time travel story about a scientific team trying to prevent their apocalyptic present by going to the past to change history. In 2035, the U.S. President sets off nuclear bombs for no apparent reason. This plunged the world into chaos and wars. Sea levels rose, creating two islands of the U.S. continent. There is a battle for control. In 2037, Elaine Randolph was born, her sole purpose, to travel back and time stop her grandfather.

Most of the story occurs in the summer of 2075. Lainey and a small crew live at the Eastern Isle Scientific Hub, which is neutral in the on-going civil war. They are working on equations to make the Sphere “time machine” work. The story was a bit slow in the beginning, but really picked up with some exciting twists midway through. I found my heart racing as Lainey tries to save the world.

The concept of time travel is an interesting one but can be difficult to pull off, as it usually leaves this reader asking questions and second guessing science. Overall, the author does a good job of explaining time travel and paradoxes, yet, I still had issues. For example, why do some characters remember all the past timelines and others do not? Also, when the group first sends through an apple and then a cat as tests, how do they know they are successful? The objects disappear – but there isn’t any confirmation the items went when and where they are sent OR that the items made it in one piece. Another big problem with time travel stories is the ability to conveniently correct problems by going through time to fix it. While there are a few times the plot direction felt conveniently adjusted and explained by time travel, overall, the author does a great job of balancing this issue by showing that traveling back in time to fix problems doesn’t always work, and can in fact create more problems.

Science aside, the romance between Lainey and Hunter was a bit hot and cold for me. This is because of Lainey believes she’s broken and unable to feel love, so she struggles with her “feelings” as she spends more time with Hunter. She wants him, opens to him, but then doubts herself and pushes him away. However, some of my issues stem from the fact that Hunter was told he would fall in love with Lainey. So for years he knew who she was and built up a fantasy life around one day meeting her. It creates an imbalance in the relationship, with Hunter controlling the outcome.

A Paradox of Fates is the first book in the Prevent the Past trilogy. So while there is an HEA for Lainey and Hunter, the story is far from over. The book doesn’t have a cliff-hanger ending, but rather is the end of part one, with many questions still outstanding. If you enjoy sci-fi romances, I recommend giving A Paradox of Fates a go.

Dr. Elaine “Lainey” Randolph was born with one sole purpose: to prevent the past. With her brilliant mind and unwavering spirit, she works tirelessly to solve the equations that will finally unlock the mystery of time travel. Then, she will leave the post-apocalyptic future her grandfather created and travel back in time to prevent his calamitous actions.

When handsome military captain Hunter Rhodes appears at Lainey’s remote scientific hub, he offers her protection. But there are strings attached to the mysterious soldier’s proffer, and Lainey finds herself wary of the man who stokes unwelcome longing and desire in her unemotional heart. For Lainey is a scientist, obdurate and dispassionate toward the notion of romantic love.

As Lainey’s band of ragtag scientists and loyal soldiers endeavor to escape the dystopian future, the evil New Establishment threatens to destroy them all. In their unpredictable timeline, the nefarious regime has become all-powerful and will stop at nothing to ensure complete world domination…