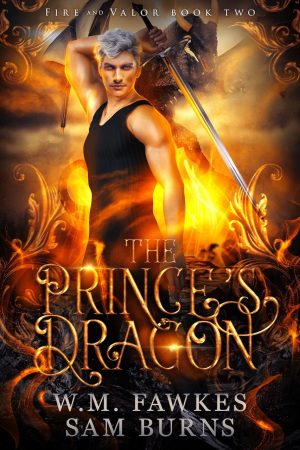 The Prince’s Dragon
Authors: W.M. Fawkes and Sam Burns
Reviewer: B.
Rating: B+

Beginning any new series seems like it would be a tall order, regardless of genre, but I imagine doing so within the parameters of an imagined world and time, while trying to craft unique plotlines and characters, might be even more difficult. Fortunately, with the worldbuilding and other introductions already handled, The Prince’s Dragon handily built on everything I liked about the first. Whether it was the magic and revenge, elves and dragons, heroes and romance—this story has it all.

Picking up almost immediately after the ending of the The King’s Dragon, The Prince’s Dragon begins with the introduction of a new character in a dire situation that will ultimately connect the various plots of the narrative. Meanwhile, back on more familiar ground in Chapter 2, the kingdom of Llangard is still in a precarious position following the death of the most recent king, the ascension of his nine-year-old son to the throne, and the appointment of a most reluctant Lord Regent. Further complicating things are serious threats from within the kingdom and without, a missing princess, and dragon politics. It’s a lot to sort out. Fortunately, the authors had things well in hand from the start this time, and keeping all the threads sorted out was as easy as it was satisfying.

As was the case previously, POV in The Prince’s Dragon is divided among all the characters, the “lens” shifting from one to another with varying frequency, and each chapter bearing it’s subject’s name. While their total number is still fairly high, the story primarily focuses on a handful of protagonists either scattered in pairs, or working together at the seat of the kingdom itself. And though parts of the narrative seemed a bit far flung at first, the addition of the dragons as allies allowed the action to speed up considerably as the novel progressed, proving that air travel really is faster.

Although I believe the prioritization of the “adventure” aspect of the story was the right way to go in the first Fire and Valor novel, I thoroughly enjoyed the deepening of the affection between several of the love interests here. What was previously an additional cause of frustration (especially for Tris and Bet) has become a source of strength in The Prince’s Dragon. Each of these pairings  grew sweeter as the story progressed, making it easier for me to more fully invest in the narrative while never putting too much strain on the individuality of the respective characters.

I wasn’t sure what to expect from this sequel, but by the end I was very pleasantly surprised. In fact, I think the extra details that were dedicated to creating a solid foundation in the first story made it easier to immerse myself in the expanding world of The Prince’s Dragon without feeling like the narrative was being stretched too thin for all it was asked to support. And, while I liked many of the characters even more than I initially had, I fell a little bit in love with Bet and Tris. Ultimately, I this was a well-crafted continuation of a promising series, and I’m excited to find out what’s in store for everyone in the next book.

B+ Liked It A Lot

The last place Lord Tristram Radcliffe ever expected to find himself was right hand to the Llangardian throne. His parentage should have seen him banished, but he managed to keep his draconic secret. Now, King Reynold is dead. Long live King Roland.

The boy ascends to rule a kingdom in chaos, and Tristram must undo the damage of the last king’s reign to save his people from lean winter and wolves in the palace itself. Reynold’s former shadow, Bet Kyston, is determined to root out King Roland’s enemies, but his version of help may cause as much harm as good.

There remains a traitor near to the throne, and when the king falls mysteriously ill, Tristram’s strongest ally is forced to leave court. As his enemies move closer, the strength of Tristram’s regency is more precarious than ever. Abandoned and friendless, Tristram must sacrifice everything to protect his homeland or risk not only Roland’s life, but his own.

W.M. Fawkes is an author of LGBTQ+ urban fantasy and paranormal romance. She lives with her partner in a house owned by three halloween-hued felines that dabble regularly in shadow walking.

Sam lives in the Midwest with husband and cat, which is even less exciting than it sounds, so she’s not sure why you’re still reading this. She specializes in LGBTQIA+ fiction, usually with a romantic element. There’s sometimes intrigue and violence, usually a little sex, and almost always some swearing in her work. Her writing is light and happy, though, so if you’re looking for a dark gritty reality, you’ve come to the wrong author.

Win one e-copy of The King’s Dragon by Sam Burns & W.M. Fawkes:
a Rafflecopter giveaway

This giveaway is sponsored by the authors/publisher. Contest rules and entry information is provided on the Rafflecopter form. Open to participants who are legally allowed to participate in such a contest as allowed by their local laws. All federal, state, local, and municipal laws and regulations apply. Void where prohibited. No purchase necessary. By participating in the contest, participants agree to be bound by the decisions of the contest sponsor. Prize will be delivered by the contest sponsor. This blog, its reviewers, and the owner are not responsible for items lost in the mail. By entering this giveaway, participants agree to abide by these terms.