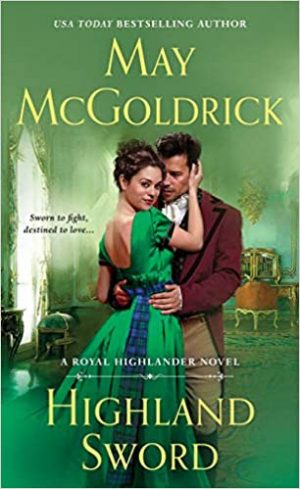 Highland Sword is the third novel in the Royal Highlander trilogy. It is primarily the story of Morrigan and Aidan, although is does bring the story of Cinead to a conclusion as well, so it changes perspective throughout the book between these three people. It is fairly fast paced, full of quick wit and great conversation, unexpected turns, humor and a lot of action. The characters are fun and play well off one another and tie up a lot of the loose ends left from the other two novels.

That said, I did feel the last couple chapters of the novel were almost too cliche. I felt story ended earlier in the book, and the last little bit was done for either word count or because someone needed the “prince” to seal the Happily Ever After, which to me was unnecessary. I also felt the hurdle that Morrigan needed to deal with should have had a trigger warning. It is wrapped in difficult emotions and will likely be a trigger for many people like it was for me.

Aidan is a strong lead who suits Morrigan well, deals with her baggage and helps her understand that she isn’t responsible for the actions of others, which is vital for someone dealing with her issues. Morrigan is a fighter in every sense of the word, which is appreciated greatly. She will not be a damsel in distress for a variety of reasons which allows her to stand toe to toe to Aidan, which is exactly what he needs. Their chemistry is evident from the start which leads for a variety of verbal foreplay and much flirting. All of which was fun to watch not only as a reader but for the other characters as well.

It is hard to know who the bad guy is as there are multiple people who deserve to be severely disliked, thankfully they all get what they deserve in the end, as they are all truly disgusting human beings.

Overall, once I got past the initial trigger issues, Highland Sword was an enjoyable lark in the Scottish countryside full of colorful characters, strong story lines, and the fierceness we’ve come to expect from May McGoldrick. It is historically interesting and highly entertaining. If you enjoyed the first two novels in this trilogy, I believe you will enjoy this one as well.

A VOW FOR VENGEANCE
Fleeing to the Highlands after her father’s murder, fiery Morrigan Drummond has a score to settle with Sir Rupert Burney, the English spymaster responsible for his death. Trained to fight alongside the other rebels determined to break Britain’s hold on Scotland, she swears to avenge her father’s death―until a chance encounter with a barrister as proud and principled as she is presents her with a hard choice…and a bittersweet temptation.

A PLEA FOR PASSION
Aidan Grant has never encountered another woman like dangerous beauty Morrigan―and he has the bruises to prove it. Yet she could be the key to defending two innocent men, as well as striking a death blow to the reprehensible Burney. Convincing Morrigan to help him will take time, but Aidan is willing to wait if it means victory over corrupt government forces and freedom for his people…and Morrigan’s hand in marriage. Can two warriors committed to a cause stand down long enough to open their hearts to a love fierce enough to last…forever?