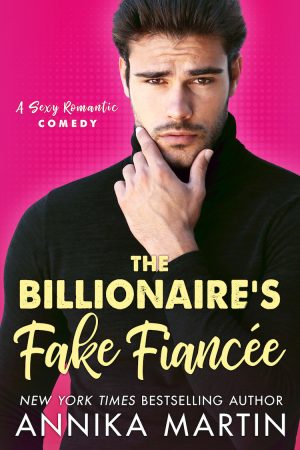 Tabitha owns her own mobile hair styling business, and for the past two years, she’s cut Rex’s hair at his office every Friday evening. She loves pushing his buttons, and while he’s a bit uptight, she’s been crushing on him since the start. Rex O’Rourke is a major financial player; when he talks, every body listens. He’s trying to win over the biggest account of his career, but in order to do so, he must spend two weeks on Gail Driscoll’s private yacht with his fiancée. The only problem? He isn’t engaged. Even though Tabitha is the antithesis of his ideal wife, she’ll make do for a fake fiancée.

The Billionaire’s Fake Fiancée is another delightful and riotous rom-com from Annika Martin. I adore Ms. Martin’s quirky, lovable characters. Her worlds are outrageous, but filled with real and tangible emotions. I absolutely adore Ms. Martin’s unrestrained humor. There is just something about the way she thinks and writes that draws me in and keeps me glued to my kindle from start to end.

This time around, heroine Tabitha, loves her soap operas and views life through a lens that is shaded by the drama and treachery of famous characters like Stephano DiMera (Days of Our Lives) and Dorian Lord (One Life to Live). I love how Tabitha thinks she recognizes lies and deceit in a certain character because of soap operas. But the best is that she knows how “things” always go down with fake relationships, and she tries to fight her feelings. It’s like she sees a train wreck about to happen, she tries to stop it by holding up a stop sign, but can’t prevent it. She knows it’s happening no matter what.

I love watching Rex change slowly. How he knows Tabitha is different, yet he wants to ignore the weird feelings she stirs within him. Yet, he can’t help but admire Tabitha, and he loves to push her buttons. He can’t help but get caught up in her. Let’s just say he does a beautiful thing because he loves Tabitha and it made my heart fill with joy.

While the pair may seem improbable, I enjoyed every minute of their journey. I loved my trip into the mad world of Tabitha and Rex. They are full of crazy energy and passion. They balance one another and together make an unstoppable team.