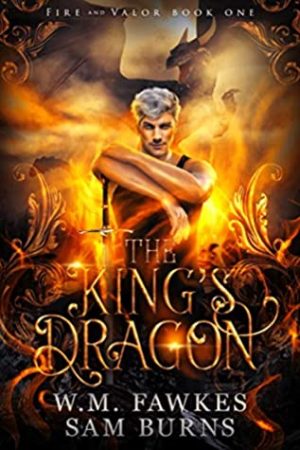 The King’s Dragon
Authors: W.M. Fawkes and Sam Burns
Reviewer: B.
Rating: B-

I don’t get to read many fantasy stories, much less LGBTQ titles in the genre, so I was really excited about the potential surrounding The King’s Dragon. Both authors are new to me as well, which further piqued my interest. From the first few chapters it was clear that the Fire and Valor series is aiming high, and so far I think it’s off to a good start.

Given that The King’s Dragon is a fantasy, an intrigue, and the first in a new series, it took a while for the momentum of the narrative to pick up. Each of the primary players except the newly-crowned king himself—around whom the entire plot is centered—are introduced in their own eponymous chapters, and every subsequent chapter is a dedicated POV shift from one to another of them for the entirety of the novel. It’s a tall order for an introductory story to tackle, and, though readers will never have to guess about perspective, I found this particular approach occasionally unwieldy at the beginning.

Something I expected, but not with such current relevance, was the history constructed within The King’s Dragon. Laid atop the foundation of knights and kings and their legends was a familiar, if pointed, lesson about freedom and vengeance, and how perspective and time can alter the meaning of both. In the case of the kingdom of Llangard, collective memory of their own battle for independence has given rise to arbitrary prejudice and cruelty. Of course, there’s a discrepancy between who the victims and villains are, depending on who is recounting the tale.

While there are romantic elements, and plenty of sexual tension (not to mention some consensual, if reciprocally angry sex), I wouldn’t characterize The King’s Dragon as a romance. Despite the large number of characters in play, Tristram and Bet are clearly the main focus of the narrative, and I liked them both a good deal. That the greatest hindrance to their mutual regard is the loathing that accompanies their respective attachments to the king was one of the most interesting aspects of the story.

Though it’s set in a fictional kingdom, something I particularly appreciated about The King’s Dragon is its timely distinction between what makes a leader versus a ruler, and how loyalty can be the most valuable of commodities, yet can’t always be purchased. For this first novel in the Fire and Valor series, at least, the primary options seem to be loyalty to king or country—but if you can’t have either of those, staying true to your own heart might just be the best option. Now that the worldbuilding has been established, and given that there are plenty of loose ends left dangling at the end of The King’s Dragon, I’m really excited to find out what happens in the next story.

Lord Tristram Radcliffe has a secret—he is the only dragon at the king’s court in Llangard. It’s a secret he’s kept from the knights he’s fought beside, from the ladies who bat their lashes at him, and from his closest companion, Prince Reynold. If it were to get out, he’d be banished to the Mawrcraig Mountains along with the rest of his kind, but the kingdom of men is the only one he’s ever known, and his heart lives in the stone halls of those who’d count him an enemy.

When the old king dies and Prince Reynold takes the throne, two visitors from the north throw Tristram into the middle of the ancient conflict between dragons and men. They put him on a collision course with the king’s shadow, Bet Kyston, a dangerous assassin who may want him dead or may want more of Tristram that he’d ever thought to give.

With the eyes of dragons upon him and a threat from the north creeping toward the home he loves, Tristram must weigh his allegiances before his dual legacies tear him apart.