A Vigil in the Mourning 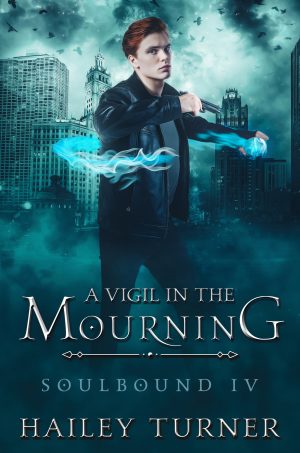 Jono dropped his hand away from Austin’s throat. “Any sign of Nicholas tonight?”

Austin shrugged. “Haven’t caught his scent or anyone else’s from their god pack.”

“Your newest all right?”

“Lira is a little rattled, but she gave as good as she got until we arrived to back her up. I told her she didn’t have to come tonight, but she insisted.”

Behind him, a couple more werecreatures came out of the building, wearing light jackets like he and Jono were. Werecreatures ran hotter than mundane humans, and it was easy to forget they weren’t cold when they needed to act like it to keep their identities hidden.

Lira Tran was a slender Vietnamese American woman in her early twenties. She didn’t look like she could bench-press a car, but looks were always deceiving. She smiled tentatively at Jono before showing throat.

“Hey, love,” Jono said gently before scent-marking her. “Heard you had a bit of a rough go of it the other night.”

The handful of others who’d come to support their alpha showed Jono their throat, and he went through the ritual greeting quickly. Then he stepped back and nodded at Leon. “Keep watch here while we get their borders marked.”

“Be careful around the playground,” Leon warned.

“I know.” Jono gestured at Austin and the others as he started down the pavement. “Let’s go.”

Patrick had joked once that werecreatures could just piss to mark their territories. Jono had smacked him in the face with a sofa pillow. Werecreatures marked territories by a pack member walking it daily and touching designated spots. It built up over time, creating a marker that surrounded a pack’s territory. The scent people carried—both their own and their pack scent—could only be tracked by someone with preternatural senses, and werecreatures were better at it than most.

It was why pass-through rights existed, allowing someone to cross a territory that wasn’t theirs without retribution. Lately, Estelle and Youssef had taken to breaking through all marked territories of the packs Jono had laid claim to and assaulting the people under his protection. It was a challenge he refused to let slide, and he had a few ideas on how to handle it.

He didn’t go into detail, and the others didn’t ask. Patrick co-led their pack, and any decisions Jono made, he knew Patrick would back him up.

Austin pointed out the locations of his pack’s markers on the walk around their small territory: light posts, post boxes, certain bricks on building corners, a sewer grate, and more. Solid items that would rarely be moved or replaced were the best for carrying scent. Jono pressed his hand to every spot, overlaying his god pack scent into the territory claimed by the New Rebels.

They were three-quarters finished when the wind picked up, carrying the faint hint on the breeze of something that smelled bitter and rotten. The bitterness reminded him a little bit of Patrick’s scent—a recognition that had Fenrir howling a warning that made Jono’s soul twist.

Jono reacted on instinct, hauling Austin away from the manhole cover the other man was about to crouch next to and mark. “Scatter!”

Preternatural speed meant none of them got hit by the four crossbow bolts that cut through the air, hitting asphalt and someone’s car instead of live bodies. The smell of silver and aconite hit Jono’s nose hard, making his eyes water. He shoved Austin behind a parked car on the other side of the street, in the opposite direction the bolts had come from.

“What the f*ck was that?” Austin hissed. “Who the f*ck uses crossbows?”

“You’d rather whoever the f*ck they are use a gun instead?” Jono retorted.

The devil you know is never the one you should trust.

Special Agent Patrick Collins is dispatched to Chicago, chasing a lead on the Morrígan’s staff for the joint task force. Needing a cover for his presence in the Windy City, Patrick is ordered to investigate a politician running for mayor. In the lead up to election day, not everything is what it seems in a city where playing to win means appeasing the gods first and the electorate second.

But Chicago brings its own set of problems outside the case: a stand-offish local god pack, a missing immortal, and Patrick’s twin sister. Fighting Hannah and the Dominion Sect provides Patrick with a sinister reminder that some blood ties can never be cut.

Left behind in New York City, Jonothon de Vere finds himself targeted by hunters who will go through anyone to kill him—including the packs under his protection. With a bounty on his head, Jono is forced to make a choice that Patrick would never approve of. Doing so risks breaking the trust he’s built with the man he loves, but not acting will give the rival New York City god pack leverage Jono can’t afford to give up.

When Patrick and Jono reunite in Chicago, Patrick must confront the fraying of a relationship he’s come to rely on for his own sanity. But fixing their personal problems will have to wait—because Niflheim is clawing at the shores of Lake Michigan and the dead are hungry.

A Vigil in the Mourning is a 102k word m/m urban fantasy with a gay romantic subplot and a HFN ending. It is a direct sequel to A Crown of Iron & Silver. Reading the first book in the series would be helpful in enjoying this one.

Celebrate this exciting new installment in the SOULBOUND series with a giveaway! Two winners will receive any e-copy of a Hailey Turner book. Must be 18 to enter and win. Open Internationally.

Hailey Turner is big city girl who spoils her cats rotten and has a demanding day job that she loves, but not as much as she loves writing. She’s been writing since she was a young child and enjoys reading almost as much as creating a new story.