Born of Mist and Legend 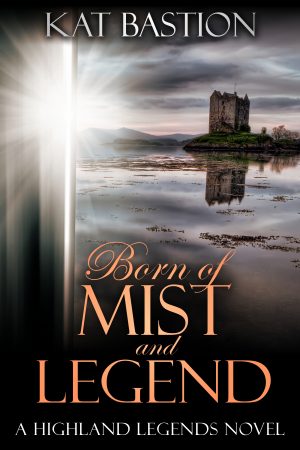 “Incorporeal.” The stunned murmur escaped tightened lips as Skorpius unfolded his arms and straightened to attention. He’d never once, in all the millennia of his existence, witnessed a human accomplish the feat inborn to angelkind.

And as Brigid’s ethereal form whispered through the barrier, the magick field flared. Her golden and his blue vibrated hotter, brighter. Until all at once, in a flash of brilliant light, the energy burst outward into millions of spinning particles. Their fused magick, which hung in suspension for a split second, then imploded straight into her chest.

Residual energy sizzled and snapped through her golden aura.

The halo of copper hair rippled from the force.

“What are you?” he murmured under his breath.

Angelic? Perhaps. But more. Much more.

Dangerous to time? Without doubt.

Any being as powerful as Brigid had become could tear a rift through time at will. Become supreme ruler of not just one plane, but multiple realms. And the fact that she obviously was still learning, still evolving, portended grave implications.

Yet regardless of the risks, the situation didn’t automatically sentence Brigid to death. Not in his mind. Not all power corrupted. He failed to pinpoint any specific example, but his gut warned him to stay her execution. For now.

She pegged him with a hard stare, chin lifting a fraction. “I’m no wee lass to be trifled with.”

“So, let’s do this for real.” As she murmured his words back at him, she infused them with power.

Atoms throughout the glade charged.

The dense forest beyond quieted, as if waiting on baited breath.

A clear sky above misted over, water molecules crystalizing before hanging in suspension.

With a preternatural lunge, Brigid blinked out of existence, then began to materialize right before him as she spun around like the twisting tip of a tornado. When she slowed into the lower frequency of solid form, twin razor-sharp blades skimmed up his chest until the dagger edges pressed against either side of his throat.

Fierceness blazed in her eyes.

Cool metal bit into his flesh over each jugular.

Skorpius didn’t flinch, remained in solid form. With a slow exhale, he arched his wings up.

Brigid glared up at him.

He held his ground, staring down into eyes that swirled and glittered a rich dark silver.

They stood in the solitary clearing, dark outcast angel towering over a fair human maiden. The soft ends of those coppery curls brushed against a chest battle-honed into sleek muscle. Scant inches remained between their beating hearts.

But human maidens don’t have swirling glittering silver eyes, do they?

He suspected Brigid had no idea. That she’d begun to transform. That she was becoming something…other.

To advance matters, he inhaled a slow breath, then exhaled and leaned against the edges of her blades. “What a warm welcome,” he taunted. A daring smirk tugged at the corner of his mouth.

“You’re not welcome,” she replied, gaze still locked with his.

The fearless vixen stood her ground.

So quick to behead me? “Have care,” he warned in a soft tone. Toward the both of them. Because few things could end him permanently, but losing his head was one. And neither of them understood the limits of Brigid’s new power. More important, if she pushed her luck too hard, he’d force those blades to sever her neck before she’d manage a blink. “I’m not here by will,” he admitted.

The slightest twitch furrowed her brow.

“Have you ever taken a life before, Brigid?”

“I came into the world takin’ life.” The fierce whisper escaped tightened lips.

Interesting. He stared hard into the depths of silvery eyes churning with raw emotion. However, he had no desire to delve into psychoanalysis. He also refused to relent. Instead, he pressed harder on the struck nerve. “And now? Could you take a life now, watch the lifeblood drain from another whose fragile heart beats…until it beats no more?”

Brigid’s face paled at the crude description. But her gaze sharpened. Those soft shoulders squared from her spine of steel. She leaned her weight into the sharp blades threatening him.

“Aye,” she whispered, confidence booming in the barely spoken word.

Experience Skorpius and Brigid’s entire epic adventure in Born of Mist and Legend!

Following her award-winning debut, Kat Bastion returns to the Highland Legends series with the epic journey… Born of Mist and Legend.

Amid mythical lands, where Arthurian tales run blood-deep and castles vanish into fabled mist, a stormy sky breaks open with deafening thunder on a dying mother’s whispered enchantment… and her newborn’s die is cast. Eighteen summers later, magick sparks to life within the charmed child’s veins, and the fates resume their course.

Rise of a fallen angel…

Rebirth of a Highland goddess…

Revenge of a legendary wizard, craving their power.

Dark angel, outcast of his kind—lone angelic guardian of time itself—Skorpius receives a bewildering dual directive. Protect a human female. And end her.

Once bright and innocent, sister to the laird of the mysterious Clan Brodie, Brigid awakens to incredible magick within her. And the ability to sense a foreign energy: Another stalks her, a beast hunting its prey.

On a quest to protect her clan and save humankind, Brigid forges beyond the only home she’s ever known into the wilds of Scotland. Her destiny—to battle an ancient lurking menace—beckons her. She braves her task with fierce determination, even though she’s a mere novice among masters.

Upholding his vow to protect time against any threat, Skorpius is duty-bound to guard the female, with or without her consent. For he alone presides as judge and executioner.

As unprecedented danger to the fabric of time looms, the two beleaguered souls walk a tightrope between cure and cause. Yet while the destiny of every realm hangs in the balance, they are all that stand between salvation and destruction.

But against insurmountable odds…will they both survive?

***Born of Mist and Legend is a standalone full-length romance told in dual POV. Due to mature themes and adult language, this book is for those 18 and older.***

Kat and Stone Bastion’s bestselling first novel No Weddings and the No Weddings series were named Best of 2014 by multiple romance review blogs.

When not defining love and redemption through scribed words, they enjoy hiking in vivid wildflower deserts, ancient tropical forests, and historic urban jungles.

Have you joined our Bastion Family Adventurers?

Be the first to receive all the amazing exclusives:

♥ Exclusive Cover Reveals: Be the first to participate in the unveiling.

♥ Exclusive FREE Stories! For a limited-time, shared only with our family.

We’re honored for you to join us: Bastion Family Adventurers