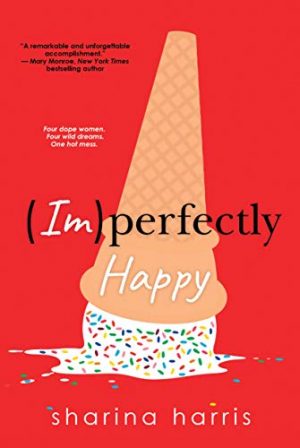 Raina rooted through her large purse and produced a tattered blue notebook. She raised the book in the air, still silent and with serious eyes. A rush of adrenaline blazed a path from my toes to my head. I recognized that notebook. We’d written our goals and what we accomplished. It had been my idea to create a points system and award the winner every semester. Back then, I had no doubt I’d be a master sommelier by thirty. I swallowed around the knot that had formed in my throat. Was the universe trying to tell me something or torture me?

“Well, this is a blast from the past.” Sienna’s voice was low and careful.

“Girl no . . . just . . . just no.” Nikki’s voice shook with emotion. “We aren’t doing this. I refuse.” “Just hear me out.” Raina slapped the notebook on the ottoman. “We all know what this is. We created our group years ago and we fell off, which sucks, but I think we should reinstate it.”

Nikki groaned. “That was years ago. Things change. Why are you bringing this up now?”

Quite honestly, I wanted to ask the same question.

Sienna piped up. “We promised to hold each other accountable.”

“Yeah, when we were barely twenty. We didn’t know what we wanted out of life.” Nikki’s voice was high and pinched and stressed. Nikki was usually a straight shooter, but I could taste the acrid lie. She wanted to be a professional musician. Nothing had changed and nothing could take away her talent. Not her husband or her kids or her lack of confidence.

Raina shook her head. “Nikki, you are so talented. You could still go for it. But you’re gonna have to put on your big girl panties, and most of all, don’t lie to yourself. You know you aren’t happy with washing clothes and keeping house.”

“Being a stay-at-home mom is—”

“Sucking away your life force.” “Damn, girl,” Nikki muttered under her breath as she folded her arms across her chest. Classic Raina, the queen of duality. She was a like a Sour Patch Kid. First she’s sour, then she’s sweet. I think she used most of the sweet at her job that she ironically hated and for Cam, whom she actually loved but was too afraid to admit it.

“And Sienna,” Raina tapped Sienna’s shaking legs, “you wanted to go to law school, pass the bar, and become an attorney. You’ve done all of that. You have just one more goal: running for office.” Sienna tugged at her skirt with an uncertain smile. “Yeah, and now Keith is on city council.” She shrugged and cleared her throat. “I’m helping his campaign. It’s the n-next best thing.”

Raina shook her head. “But is it?” Her voice was full-on Raina, the radio therapist. “I’m just saying that you deserve to have your own thing. Your own piece of happiness.”

“No. But maybe do something else. Run for a school board position. Just something to consider, okay?” Sienna nodded without her usual enthusiasm. Raina tilted her head and moved on to her next victim: me. “Kara.” Raina cleared her throat. “It’s great that you are working in your field, but don’t you want to pass that wine test?”

My cheeks heated from her direct question. “Of course I do, but it’s not that simple. I’ve tried three times.”

“Then try again. Didn’t you tell us a few months ago that you were practicing with Roddy?”

“Yeah, well, Roddy is pissed with me. He thinks I’m not living up to my potential.”

Raina bobbed her head. “I’m not picking on you, but girl, you used to run around like a My Little Pony on crack. If you weren’t working, you were zip-lining, BASE jumping, or climbing a pile of rocks. I know that things changed since—”

I squared up my shoulders, squinted my eyes, and scrunched up my face in a don’t-screw-with-me look. Raina raised her hands in the air, a sign of surrender. “Sorry,” she whispered. “We’re here for you, girl, and you’ve been keeping things in.” Her voice was genuine and a touch worried. It was the tone she used for her raindrop callers who had legitimate issues.

I relaxed and sighed; I knew it was over-the-top. “You aren’t wrong. And it seems like this week is tell Kara how it is.” I recounted my conversations with Roddy and Darren. Nikki leaned and gave me a side hug. She knew how it felt to lose a parent. Her dad had died when she was younger, and from the reverent way she talked about him, I knew they were extremely close.

“Look,” Raina leaned back into the sofa, “I know I’m coming off as aggressive, and you can go around and take turns on how I haven’t done anything with my life. But I realized something the other day: We’re living scared. We used to be fearless and confident.”

I found myself nodding. I’d been thinking the same thing, and I was tired of this new version of me. I wasn’t weak. I didn’t lose, and if I did, I came back swinging.

When four college friends formed the Brown Sugarettes Mastermind Group, they had very different goals—but matched each other in ambition. Yet ten years later they can’t help wondering what happened to the hopeful, confident, driven women they used to be—and how to get
them back . . .

Radio personality Raina, known as “the black Delilah,” hates the wholesome persona that’s made her a success. Doling out syrupy versions of her grandma’s wisdom feels worlds away from the sarcastic,
tell-it-like-it-is woman Raina really is.

Kara Jones was sure she’d be a master sommelier by thirty. Life and loss interfered with that plan. Now she has one more chance—but it’s taking a toll on her self-esteem and her marriage.

Nikki Grayson hardly recognizes the stay-at-home mom she’s become. When her band signed a record deal, she swapped the limelight for a minivan and a sensible ’do. Now she’s wishing she had followed her heart. Instead, she’s drowning her regret in alcohol.

Public defender Sienna Njeri willingly put her city council aspirations aside to support her fiancé’s bid for office—and now she’s wondering if her loyalty is misplaced.

Longing for the support, advice, and tough love they once shared, all four resolve to start meeting up again. After all, their dreams may still be within reach. But are they worth the price they’ll pay to achieve them?

Sharina Harris earned her Bachelor of Arts degree from Georgia State University. After college, she pursued a career in digital marketing and public relations. Although her profession required writing, she decided to pursue a career in writing in 2012. Sharina’s contemporary romance series under the pen name, Rina Gray, was named Book Riot’s 100 MustRead Romantic Comedies. When Sharina’s not writing, she can be found with her head stuck in a book, yelling for her favorite NBA teams, and spending time with friends and family. Sharina resides in Atlanta with her husband and son. Visit her at SharinaHarris.com.