Audiobook review: A Deadly Inside Scoop by Abby Collette 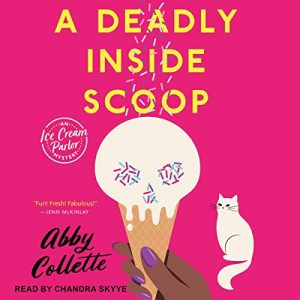 Bronwyn (Win) Crewse moved home and is reopening her family’s handmade ice cream shop in Chagrin Falls, Ohio, a small suburb of Cleveland. Unfortunately due to some unforeseen delays, she has to open in late fall, and on her first day there is a huge blizzard. Even worse, Win discovers a dead body, and her father is a suspect in his murder. Together with her friends and family, Win attempts to bring customers into her store while proving her father is innocent.

A Deadly Inside Scoop is a fun start to a promising new cozy series. Win is a wonderful main character; smart, creative, and I adore how close she is with her family. She’s an “every day” gal who has big dreams and works hard. I like that she doesn’t act too aggressively or make any “too stupid to live” decisions. Although, I have to wonder why she didn’t run out to grab a newspaper after someone comes into the shop talking about a murder because it’s in the papers. Win thinks things through, unlike her best friend Masey, but does get understandably emotional when it comes to protecting her father.

The murder investigation starts a bit slow as the author spends a lot of time developing Win’s character. While I normally enjoy some time spent world building at the beginning of a new series, I found that I was losing interest after a while and up’d the playback speed from 1.5x to 1.75x. I also found myself annoyed with Masey, who to acted rashly, making all sorts of assumptions and accusations. After the midway point in the book, Win broadens her investigative circle to include her grandfather, and she seems to get on the right tract. The story picks up and improves.

Narration: A Deadly Inside Scoop is shared via the first person POV of Win, and I like that the narrator puts us right in Win’s head. Ms. Skyye gives a solid performance, creating a strong voice for Win that bends as her emotions fluctuate. She gives Win a light but confident voice, conveying her sweetness, even when frustrated. The narrator alters the dialogue for each character, modifying for gender and age. Her male voices are appropriately deeper and definitely more masculine, but as with most female narrators, not quite perfect. With the supporting characters, the voices are modified enough to make each distinctive from the other.

In the end, I enjoyed following Win as she opens her family store and saves the day solving a murder. I look forward to another trip to Chagrin Falls, Ohio.

This book kicks off a charming cozy mystery series set in an ice cream shop-with a fabulous cast of quirky characters. Recent MBA grad Bronwyn Crewse has just taken over her family’s ice cream shop in Chagrin Falls, Ohio, and she’s going back to basics. Win is renovating Crewse Creamery to restore its former glory, and filling the menu with delicious, homemade ice cream flavors-many from her grandmother’s original recipes. But unexpected construction delays mean she misses the summer season, and the shop has a literal cold opening: the day she opens her doors an early first snow descends on the village and keeps the customers away. To make matters worse, that evening, Win finds a body in the snow, and it turns out the dead man was a grifter with an old feud with the Crewse family. Soon, Win’s father is implicated in his death. It’s not easy to juggle a new-to-her business while solving a crime, but Win is determined to do it. With the help of her quirky best friends and her tight-knit family, she’ll catch the ice cold killer before she has a meltdown . . .