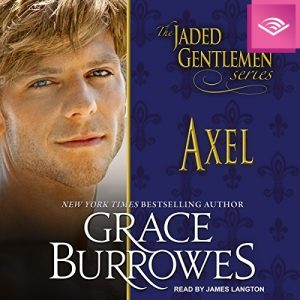 Axel opens with Axel recently returning home from the holidays at his brother’s home (Matthew, previous book). He is called to his closest neighbor’s home in the middle of the night because Mrs. Stoneleigh found her elderly husband shot dead in his study. Presuming it was suicide, she’s a bit shocked when Axel, the neighbor and Magistrate, tells her it was murder.

To keep her safe from potential threats, Axel invites Abby to stay at his home while he solves her late husband’s murder. Soon the pair strike up a genuine friendship and uncover several crimes committed by the late Stoneleigh himself. With propriety saying they should stay apart, can Abby and Axel accept their love and move forward?

Axel is the third book in the Jaded Gentleman series, but the fourth I’ve read. I don’t know if the formula of the books (unconventional woman, jaded gentleman) started to wear on me or if it was just this story, but I didn’t find Axel to be as engaging as the other three books. I did enjoy that the mystery opens this one. And what a mystery it is – murder! It lended a bit of urgency to the storyline. However, things really slowed down shortly after the start. While normally I enjoy the slower pace of the series, I got a bit frustrated with this one. At only a third of the way into the story, I was able to see the foul play afoot, and I just want the story to move forward. Unfortunately, Axel has a way of giving extra insight and taking a meandering path to make his points. Additionally, the climax of the mystery was overly complicated and unnecessarily drawn-out.

Mr. Langton’s performance was once again perfect in tempo and cadence for the story at hand. However, I noticed a distinct change in the voices of both Matthew and Sir Nick, and although those characters are found only in supporting roles, I was annoyed every time their parts came up in the story.

Overall, Axel is a good story, albeit a bit long and drawn-out. After listening to four books, the series has run its course for now. (I started with book 4 of 4). Although each had a unique story, the formula was very much the same. The long, drawn out pace of this one got to me at times. But I genuinely enjoyed both Axel and Abby. I loved their dialogue and joint discovery of love and pleasure. The mystery of who killed her husband and why was a little too convoluted and led to some of my bother.

Axel Belmont, though a wealthy and much-respected botanist, occasionally takes a turn serving as magistrate in his rural corner of Oxfordshire. When the owner of a neighboring estate is the victim of a homicide, Axel initially suspects the man’s much younger wife, Abigail Stoneleigh, of committing the crime. But then Abby appears to be in harm’s way, and Axel’s investigation uncovers longstanding deceptions aimed at cheating her out of wealth and happiness. The solution to this deadly puzzle remains elusive, even as Axel captures Abby’s heart and surrenders his own. Axel is a fine investigator, a devoted father, a brilliant scientist, (and an excellent kisser), but will he solve the mystery before the villain strikes again?