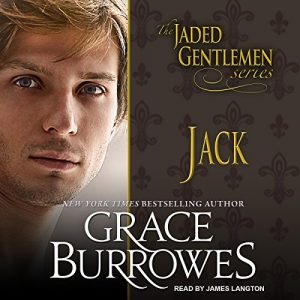 Bachelor Sir Jack – not a rake, and a fine gentleman, is dreading the impending visit of his mother – a woman he can never please. She’s going to be staying with him for a few months after the holidays and he’s at wit’s end. His household staff isn’t gelling, and he’s worried what will happen. He seeks advice from his friends, the Belmonts, who instead give him a solution. They offer their own Miss Madeline Hennessey to be his mother’s companion and help straighten out affairs.

Madeline doesn’t want to leave her post with the Belmonts – she’s worried that the newly married widow and his wife, whom she adores, will discover her services are no longer needed. However, the coin is too good to pass up. Soon, she has Jack’s household running smoothly, she’s assisting Jack in solving the mystery of a petty theft spree, and falling for the man she never wanted.

I simply adored Jack and the slow-burn romance that develops between Jack and Madeline. Both strong individuals, the pair are quite equally matched, both kind and compassionate, and not of the norm for the time period. They are very attracted to one another, both in mind and body. Knowing nothing could ever come of their dalliances, the indulge in scandalous behaviors, drawing them both further into true feelings of love.

This is the first historical romance I’ve listened to via audiobook (January 2018), so I don’t know if the performance by Mr. Langton is typical. At first I found it a little awkward, unsure if it’s only the narrator or if it’s also the writing style, but the story came off like a tale from long ago being shared with me by an wise, old man. After a while, I became used to Mr. Langton’s performance, enjoying the variety of voices he uses for the characters. While I never felt that he put me into the story or that he became the characters, I did enjoy sitting back and listening to him spin the tale.

Jack is a wonderful tale about an honorable man and a worthy woman finding love. Jack and Madeline make a great pair. Right from the start, we witness how well they understand one another and how they make the other a better person. Working together to solve mysteries – whether they are solving crimes or domestic issues – the pair are unstoppable.

Sir John Dewey Fanning (Jack to his familiars) is magistrate in a corner of Oxfordshire plagued by one incident of petty mischief after another. To add to his aggravation, his matchmaking mama is due for a prolonged visit, just when his domestic staff is at sixes and sevens. Jack turns to Miss Madeline Hennessey both to organize his household and to serve as his mother’s temporary companion, despite the fact that he’s long harbored feelings for the ever-competent (and lovely!) Miss Hennessey. Madeline reluctantly accepts the position, and proximity leads to investigations of an amorous nature. Can Jack stop the crime spree and steal Madeline’s heart, too?