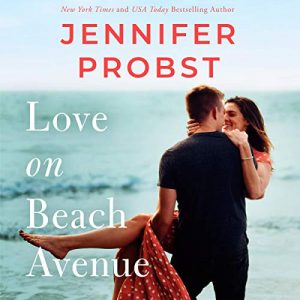 Avery Sunshine and her two sisters took over Sunshine Bridal from their retired parents. Avery loves her job, loves creating the perfect wedding, and loves love. When her best friend Ally asks her to plan her own wedding on short notice, Avery jumps at the chance. The only catch, Ally’s only living relative, her big brother Carter, is going to be Ally’s Man of Honor.

Carter is not happy that his sister picked Avery to plan her wedding. He remembers her as the wild child who once landed Ally and herself in jail. He’s determined to make sure Ally’s wedding is perfect, even if that means getting Avery fired. But after an emergency takes Ally away from Cape May, it’s up to Carter and Avery to work together to pull off Ally’s dream wedding.

Love on Beach Avenue is a delightful read for fans of the enemies-to-lovers trope. Avery and Carter have a past… he is the uptight older brother of her best friend in college; she is the out-of-control girl who would lead his baby sister astray. They start the summer off assuming so much about the other. They argue and try to outdo the other like teenagers vying for Ally’s approval. For me, this went on too long and at times, the criticism and underhanded behavior was cruel.

This one is tough to rate because I really struggled with the first half of the book. Avery and Carter’s bickering, sabotaging, and bet-making wasn’t playful for me, it was nasty and hurtful. I nearly DNF’d the book a couple times. But as they get past their rivalry and preconceived notions, they open up and the attraction/romance felt real to me. The second half of Love on Beach Avenue was much better, with the pair focusing on one another and trying to find out if they have something more than lust between them. The issues between them are real and painful, giving my emotions a workout. The second half of the story saved the book for me, and is more along the lines of what I love in a romance.

Narration: The story is shared via the third person alternating POVs of Avery and Carter, with Ms. Brentmoor (SB) sharing Avery’s POV and Mr. Pallino (BP) sharing Carter’s POV. SB provides a strong feminine narrator that captures Avery’s confidence. She can also soften the edges as necessary. She deepens her voice for Carter and the other males. Most characters are distinct from one another. The other characters are fitting and her work blends well with BP. BP has a gravelly, rough-edged voice for Carter, capturing his sexiness and toughness. Although BP’s male voices are very masculine, he is able to soften and lighten his voice appropriately for females. Again, he distinguishes between all characters and blends well with SB’s work.

In the end, I plan to return to Cape May with the release of Temptation on Ocean Drive later this summer.

Avery Sunshine might not have a soul mate of her own, but she still believes in happily ever after—for her clients. Making dreams come true is her business at Sunshine Bridal, which she runs with her two sisters. When her best friend announces her engagement, Avery is thrilled to take charge of the giddy bride-to-be’s big day. Less thrilling? The arrogant and demanding man of honor.

Carter Ross’s first instinct: call 911. He promised to always take care of his impulsive little sister, and he honors that vow. Even if it means taking over where he’s sure Avery will fail. At best, she’s unpredictable. At worst, if she’s anything like the spitfire of a college girl he remembers, the main event could run wild.

With Avery and Carter wrestling for control, tempers heat up. So does the spark of attraction they’re fighting with every kiss. As the wedding draws near, it’s time to reconcile a rocky past and make a decision that could change everyone’s lives. Because what they’re rebelling against looks a lot like love.