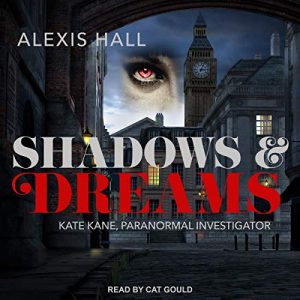 Shadows & Dreams, the second novel in the Kate Kane, Paranormal Investigator series, begins with a new case and a glass of whiskey, as all good mysteries should. Picking up three months after the conclusion of its predecessor, Iron & Velvet, we find Kate in a serious relationship with Julian Saint-Germain, Vampire Prince of London, sharing her flat with a literal living statue, and one door knock away from inevitable cataclysm.

I’ve always been very fond of Kate, and listening to Shadows & Dreams didn’t diminish that regard one bit. Kate seems to have that effect on the other characters in the story, as well, despite her apparent surprise that she not only has allies, but friends. Even among those who’d like to kill her, she’s achieved a kind of resentful acceptance and acknowledgement that she’s going to be a central part of things. Throw in an ancient vampire queen, a wannabe deity, and two more of Kate’s exes and Shadows & Dreams should have plenty to keep most readers’ attention just fine.

One particular thing I respect about the Kate Kane stories is how vibrant and interesting most of the other characters are. In addition to those from the first book, we are introduced to several new characters including Eve (the ex who left Kate “for a tech startup”), Kate’s ex-boyfriend’s family (who are a hoot), and others. Among those returning are Ashriel, Nimue, and Elise, all of whom I love. And as much as I’d like Kate to find a kind of happiness she could stand for the duration, this audiobook reminded me that I wasn’t upset that Julian didn’t shine quite as brightly here by comparison.

Another aspect of this series that I liked even better this time around is that, despite the faction politics and general destruction, it’s funny. Kate’s spectacular epitaphs are always some of my favorites, but there are plenty of other good, snicker-worthy moments, too. In fact, I laughed harder during Shadows & Dreams than I did while listening to Iron & Velvet, which is saying something.

Which brings me to the narration of the story. Cat Gould delivers another solid performance here, giving Kate’s personality a little more breathing room. There are still a couple of characters, Julian, in particular, that I can’t quite settle in with, but there seemed to be an increasing ease with Kate’s world that I appreciated. Regardless, I’m not sure if it was her comfort level or mine that’s better, but I enjoyed listening very much.

Yet again, Alexis Hall has written one of the most unique and captivating collection of stories I’ve had the pleasure to read in a very long time. Listening to the audiobook version of Shadows & Dreams was a delight, and reminded me why I liked it so much in the first place. Hearing these two stories close together was also a lot of fun, and I recommend anyone else who has the chance do the same. With only one story left in the series (so far!), I’m a little reluctant to jump in to the next title right away, but I am absolutely confident that it’ll be just as marvelous.

My Ratings
Story: A
Narration: A-

The two parts of being a paranormal private investigator I could really do without are being forced to eat bananas by an animated statue with a potassium fixation, and being put on trial for murder by a self-appointed council of vampire oligarchs.

To be fair, I did kind of do it (the murder, not the bananas). But I was kind of saving my girlfriend, who is kind of one of them.

On top of this, I’ve also wound up with a primordial queen of the damned trying to strangle me in my dreams. And the conspiracy of undead wizards who tried to sacrifice me 15 years ago has decided that now is the best possible time to give it another go.

Throw in the woman who left me for a tech start-up, the old girlfriend who I might sort of owe eternal mystical fealty to and a werewolf “it girl” who can’t decide if she wants to eat me in the good way or the bad way, and I’m beginning to think life would be easier if I made better choices. Then again, it’d be a whole lot less fun.