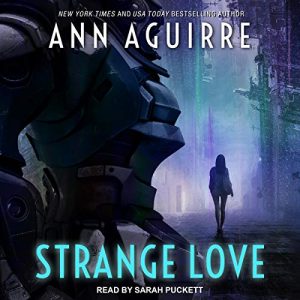 Zylar comes from an evolved biped, bird-insect-like race. He has failed to secure a mate at four consecutive annual Choosings. This year is his last chance so he makes a match with an off-world female. Unknown to him, his ship makes an error, and they end up on an unidentified planet where he mistakes a lower primate for his bride-to-be.

Beryl Bowman is an earthling completing her community service (related to drunken and disorderly conduct) when a strange creature looking like the Predator from the Arnold Schwarzenegger movie shows up and abducts her and her dog, Snaps. Unfortunately, once Zylar realizes the mistake and puts communicators in Beryl and Snaps, they are far from Earth with no way to return.

Strange Love is a quirky, entertaining romance about an unlikely pair finding love against the odds. Ms. Aguirre does a fabulous job of creating a connection between two completely opposite, seemingly incompatible souls. Beryl and Zylar experience all the emotions: starting with fear and mild revulsion, progressing to friendship and trust, and ending in love. The strangeness, close proximity, and need to survive the Choosing, coupled with open and direct communication and willingness to adapt and adjust, gives the pair the chance to explore an unconventional romance.

Supporting characters add a lot to the story, starting with Snaps, the “fur person offspring” of Beryl. Since Zylar doesn’t know any difference, he puts a communication module in Snaps, allowing him to “talk.” It’s fun and adorable, but also allows him to grow and learn more than a dog should. He evolves while remaining a dog at heart. Additionally, Beryl’s openness also allows her to befriend another competitor, which ultimately allows Beryl to survive. Then there is Zylar’s “brother,” who is a stereotypical pompous a-hole. Beryl’s rejection of his advances drives much of the plot.

Narration: The story is shared via the third person POV of both Beryl and Zylar. The narrator speaks in a soft, somewhat breathy female voice which remains the same for both POVs. The narrator is slightly different than Beryl’s speaking voice, making them distinct. Zylar’s speaking voice is deeper and more rigid, which suits his personality. Even though the narrator’s voice is the same for both POVs, the modified dialogue and writing style makes it clear which POV is presented at any given time. My favorite voice is that of Snaps, which comes across just like one would imagine a happy dog would sound.

Strange Love is an alien love story that defies the norm, bringing together two souls so different yet so similar. Both Beryl and Zylar become better because of the other. It’s non-traditional but wholly perfect.

Zylar of Kith Balak is a four-time loser in the annual Choosing. If he fails to find a nest guardian this time, he’ll lose his chance to have a mate for all time. Desperation drives him to try a matching service but due to a freak solar flare and a severely malfunctioning ship AI, things go way off course. This ‘human being’ is not the Tiralan match he was looking for.

Beryl Bowman’s mother always said she’d never get married. She should have added a rider about the husband being human. Who would have ever thought that working at the Sunshine Angel daycare center would offer such interstellar prestige? She doesn’t know what the hell’s going on, but a new life awaits on Barath Colony, where she can have any alien bachelor she wants.

They agree to join the Choosing together, but love is about to get seriously strange.