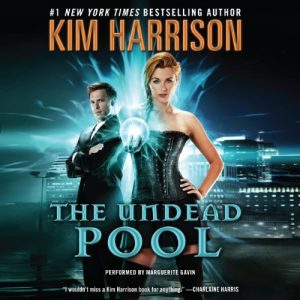 If you are not up to date on The Hollow series then read this review at your own risk. (But really who reads a review on the 12th book in a series they’ve not read?! It’s your own fault if you get spoiled on the series.) And there will be spoilers for The Undead Pool. This is less of a review and more of my gushing about the book and what happens in it.

If you can’t guess by the title, The Undead Pool deals with the vampires of Cincinnati. The vampires are my least favorite species in The Hollows series. I’ve just never warmed up to them as a whole and Ivy just gets on my nerves. I thought maybe we would finally get the answer to the question if Rachel could save a living vampire’s souls when they die the first death. Nope. No answer.

Instead, we get a new weird plot this late into the series. Seriously, this is the next to the last book. There’s no time for new stuff. We need answers to old questions.

THIS IS WERE THE REAL SPOILERS START!!!!

Ever since Trent walked onto the pages of The Hollows series we’ve all wonder “will they”. Well, they’ve danced around it with a few kisses here and there…

In The Undead Pool I’m reminded that female witches have an extra muscle in their lady town that grabs hold of their male partner’s penis when they orgasm. And the better the orgasm the longer they hold on. And boy does the itchy witch hold on to the cookie maker.

So since the vamps are not my favorite supes in The Hollows the best parts of The Undead Pool were all the Rachel and Trent parts. And the few demons parts with Al and Newt. Speaking of Al, I wonder how things will end with him and Rachel after the way their last talk went.

With 12 books under Kim Harrison’s belt, she still writes an outstanding plot and characters. I’m both excited and sad to get my hands on the last book, The Witch With No Name. It’s going to be hard to let Rachel, Jenks, Al, and Trent go.

Witch and day-walking demon Rachel Morgan knows magic – earth, ley line, even the forbidden demon magic – and that knowledge has saved her life more than once. But now something – or someone – is attacking Cincinnati and the Hollows, causing spells to backfire or go horribly wrong while living vampires attack humans and Inderlanders alike.

The pressures build when the city is quarantined to contain the unreliable magic, and Rachel must stop the attacks before the undead vampire masters who keep the rest of the undead under control are lost and it becomes all-out supernatural war.

The only way to do so is through the ancient elven magic, but that carries its own perils – for magic always has a price, and gods do not come lightly when called.

Audiobook Review: The Witch With No Name 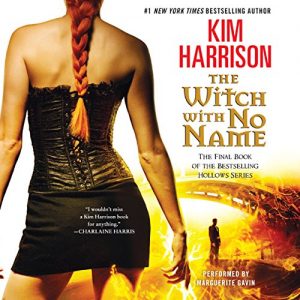 The LAST BOOK IN THE SERIES SO THERE MAY BE SERIES SPOILERS AHEAD.

The Witch with No Name may not have been the best book in the series (it was close) but it left me satisfied. What a great ending to a fantastic urban fantasy series. The last chapter almost earned it an A+ rating, but I dropped it to an A rating because I thought The Undead Pool and Pale Demon were just a touch better.

Rachel wouldn’t be Rachel if she didn’t try to mess up something good in her life. I was getting a little tired of her second-guessing her relationship with Trent. I kept thinking “Don’t you f*ck this up Rachel!” Trent really was the right guy for Rachel in the end. He would call her on her B.S. every time.

I thought with The Undead Pool we would get the answers to the undead and their souls. But no, it carried over to The Witch with No Name and it gets wrapped up.  So does the storyline of the Demons and the Ever After. I love how Kim Harrison weaved the two species’ issues together and how they were solved.

I was worried about Al after The Undead Pool but he was back and he and Rachel made up. I love Al! And I got teary-eyed a few times on his behalf. Seriously I’m a little misty-eyed now just thinking about him.

With The Witch with No Name being the last book, we got to see some characters from earlier books show up and I was so glad Nick was not one of them! Rachel’s mom shows up along with a few other characters to help round out a nice cast to bring the series to an end.

Now that the ride is over I’m going to miss Al and Jenks the most.  I’ll never look at Tinkerbell the same after hearing all of Jenks’ curses involving her. Here are some of my favorites.

There is no doubt in my mind I will revisit this series on audio. I’ve really enjoyed Marguerite Gavin bring this fantastic world and characters by Kim Harrison to life.

Rachel Morgan’s come a long way from the clutzy runner of Dead Witch Walking. She’s faced vampires and werewolves, banshees, witches, and soul-eating demons. She’s crossed worlds, channeled gods, and accepted her place as a day-walking demon. She’s lost friends and lovers and family, and an old enemy has become something much more.

But power demands responsibility, and world-changers must always pay a price. That time is now.

To save Ivy’s soul and the rest of the living vampires, to keep the demonic ever after and our own world from destruction, Rachel Morgan will risk everything.

RACHEL MORGAN IS BACK–AND THE HOLLOWS WILL NEVER BE THE SAME.

What happens after you’ve saved the world? Well, if you’re Rachel Mariana Morgan, witch-born demon, you quickly discover that something might have gone just a little bit wrong. That the very same acts you and your friends took to forge new powers may have released something bound by the old. With a rash of zombies, some strange new murders, and an exceedingly mysterious new demon in town, it will take everything Rachel has to counter this new threat to the world–and it may demand the sacrifice of what she holds most dear.