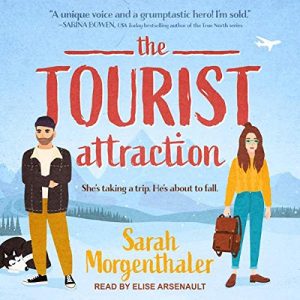 Zoey saved her tips for years so she can finally take her dream vacation to Alaska. Sleeping on the couch in her friend’s swanky hotel suite, Zoey plans excursions that will fulfill her bucket list; however it seems like the world is against her when something goes wrong with every trip. The best part of her vacation is meeting cranky, goofy Graham, the owner of the local diner.

Graham loves Moose Springs and his quiet life. Graham hates tourists with their snobby attitudes and disregard for the locals and their way of life. But he doesn’t mind making a buck of two from them at his diner. However, he tosses out his rules when he meets Zoey, immediately knowing she’s not like the others.

What should have been a dream vacation turned out to be just that, but not in the ways Zoey expected. Instead of seeing all the perfect sights and having amazing excursions, Zoey makes friends and falls in love. The Tourist Attraction is a low-conflict, slow-burn rom-com that hits some high notes, but ultimately falls flat in execution for this listener.

Graham is cranky, always complaining about the tourists and what they do to his town. I immediately likened him to Luke from the TV show Gilmore Girls. They are nearly the same, but Graham has a little more pep and exuberance than Luke. Graham falls for Zoey, but is conflicted by his self-imposed rules regarding tourists. Yet, he won’t stay away, continuing to find ways to spend time with Zoey. The problem is, he refuses to put himself all the way out there. Because he is so worried about getting hurt when Zoey leaves, coupled with his attitudes towards outsiders, Graham never really commits to Zoey or shows her his true self until it’s almost too late. Additionally, he’s a really jerk to Zoey on more than one occasion. Zoey is kind-hearted and sees the best in Graham, forgiving him for his bad judgement.

Here’s my biggest issue with The Tourist Attraction: I hate the way Zoey’s friends and Graham make fun of and treat Zoey throughout the book. Lana, Zoey’s close friend and a “regular” tourist in town, is a horrible friend for most of the book. Lana is one of those self-absorbed, need it my way, comes from money women; however she’s got a kind heart and wants what’s best for Zoey, yet she drags Zoey to places where she’s uncomfortable, has friends that treat Zoey with contempt, and abandons her when she should have been with Zoey. And the number of times that everyone laughs at Zoey’s expense was horrifying. Zoey takes it all in stride, but I wanted her to stand up for herself and expect more from her friends. It really rubbed me the wrong way.

Narration: The story is shared via the third person POVs of Graham and Zoey. Ms. Arsenault uses a natural-voiced female for the narrator, changing up the voices for dialogue. At first, the female narrator sounds too feminine to carry Graham’s POV narration; however, over time I adjusted my expectations and enjoyed her performance. The dialogue was well suited for each character, with males deeper and more masculine. Graham’s voice is deeper, and sounds masculine, but on the younger side. He sounds like a “dude” in his teens at times, but I think that’s also because of his personality, so it fits. The narrator works great for Zoey, who is a bit lost and overwhelmed, yet full of life and excited to be in Alaska.

In the end, I loved the premise of The Tourist Attraction, but didn’t like the personalities of some fo the key characters. I love Moose Springs and several of the supporting cast, so I’ll try out the next book in the series, hopeful that I won’t have the same issues as I did this time around.

My Ratings
Story: C
Narration: B

When Graham Barnett named his diner The Tourist Trap, he meant it as a joke. Now he’s stuck slinging reindeer dogs to an endless parade of resort visitors who couldn’t interest him less. Not even the sweet, enthusiastic tourist in the corner who blushes every time he looks her way…

Two weeks in Alaska isn’t just the top item on Zoey Caldwell’s bucket list. It’s the whole bucket. One look at the mountain town of Moose Springs and she’s smitten. But when an act of kindness brings Zoey into Graham’s world, she may just find there’s more to the grumpy local than meets the eye…and more to love in Moose Springs than just the Alaskan wilderness.