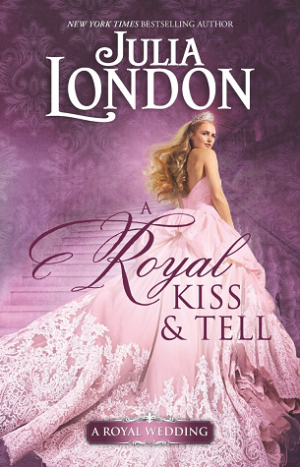 A Royal Kiss & Tell opens with Eliza and Prince Sebastian’s wedding (The Princess Plan). Dear friend Caroline is all about the show; she wants the attention that the others shun. She is hurt that Eliza didn’t ask her to be part of the wedding, even though the Alucian custom doesn’t allow for it. She’s got a thing for the prince’s brother, Leopold, who has been living in Cambridge, attending school. They met briefly, and she is appalled that he doesn’t remember her. It becomes her mission to gain his attention.

Leo does not like the princely life and its trappings. He prefers Cambridge and friends. He used to be mostly anonymous there, but after his brother’s dealings in England (the subject of a kidnapping plot and murder of his personal secretary), Leo’s every movement is monitored by the gossips. When Leo is confronted by a well-known activist who tells him of a human-trafficking plot involving highly-influential and powerful men, Leo must decide if he’ll continue with his ways or stand up and be a leader.

Although Leo he doesn’t remember meeting Caro, he does notice her. He can’t help it. And he wonders why she isn’t embarrassed by her (as he sees it) crass behavior. He can’t stop thinking about it, fascinated like as if she were a train wreck. And I love that Caro makes no apologies; she is who she is, and she is fabulous. There is an invisible force that tugs on each, bringing them together. Like Leo and Caro themselves, I don’t know when they actually fell in love. But spending time together, teasing and later working together for a common cause, allows the pair to develop interest, attraction, respect, and eventually love. And once each realizes it, they know they can’t live without it.

Similar to the resolution of the murder plot in first book in the series, the meat and climax of the slave-trade conflict is handled off page. The confrontations necessary to put an end to the trafficking and the affirmation of Leo as a hero are barely mentioned. Unlike the first book where I was mostly okay with the off-page resolutions, this time around I was left a bit frustrated. Leo and Caroline put much into saving these women, and without the details, I felt the story was incomplete. Yes, the couple gets their HEA, but these events changed both while ruining their reputations. The jump in time at the conclusion of the story, along with an abrupt conclusion, felt like a pat on the head when I wanted the explanation.

In the end, A Royal Kiss & Tell is an entertaining story and lovely romance. I also enjoy the supporting cast and can see the pairings for at least two more titles. I am really looking forward to seeing Caro’s brother, Beck, get his match and settle down!!

Every prince has his secrets. And she’s determined to unravel his…

Every dashing young man in London’s ton is vying for Lady Caroline Hawke’s hand—except one. Handsome, delectable roué Prince Leopold of Alucia can’t quite remember who Caroline is, and the insult is not to be tolerated. So, Caroline does what any clever, resourceful lady of means would do to make sure a prince remembers her: sees that amusingly risqué morsels about Leo’s reputation are printed in a ladies’ gossip gazette…all the while secretly setting her cap for the rakish royal.

Someone has been painting Leo as a blackguard, but who? Socially, it could ruin him. More important, it jeopardizes his investigation into a contemptible scheme that reaches the highest levels of government in London. Now, Leo needs Lady Caroline’s help to regain access to society. But this charming prince is about to discover that enlisting the deceptively sweet and sexy Lady Caroline might just cost him his heart, his soul and both their reputations…